Official statistics for social care in England in 2014/15 have recently been released (see http://www.hscic.gov.uk/catalogue/PUB18663 ). As with many other official statistics there have been major changes to the data collected in 2014/15, making last year something of a year zero and comparisons to previous years difficult. Nevertheless, in a series of blogposts over the next week or two, I want to use these and other statistics to explore what’s happening in social care (and in service support more generally) for people with learning disabilities in England.

Changes in the data collected make errors of interpretation even more likely than usual, so please do say if I’ve got anything horribly or slightly wrong and I’ll update the post accordingly.

The ‘transition cliff’ in service identification of people with learning disabilities as they move from services for children to services for adults is well-known and long-established. The graph below, based on data from 2010 (Emerson & Glover, 2012), shows how many people out of every 1,000 people generally are recognised as a person with learning disabilities by schools (for children) or GPs (for adults), across different ages. 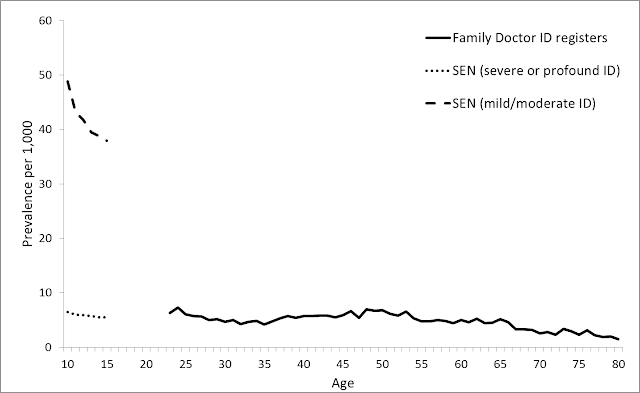 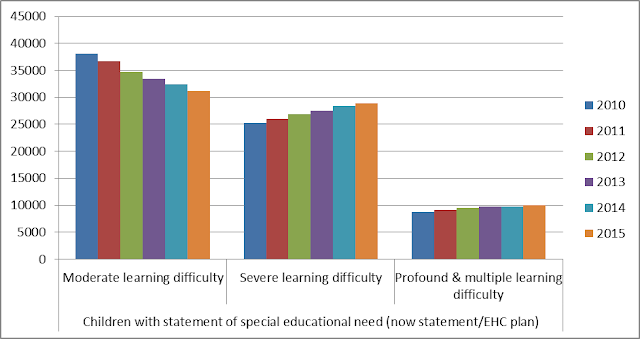 Is this because fewer children with ‘moderate’ learning difficulties are getting a statement/EHCP (which bring with them resources and responsibilities for services) and are being identified at the less resource-intensive level of ‘school action plus’ instead? The graph below says no; if anything the number of children with ‘moderate’ learning difficulties at school action plus level plummeted even faster from 2010 to 2014 – in 2015 the category of ‘school action plus’ was abolished from the publicly available statistics. 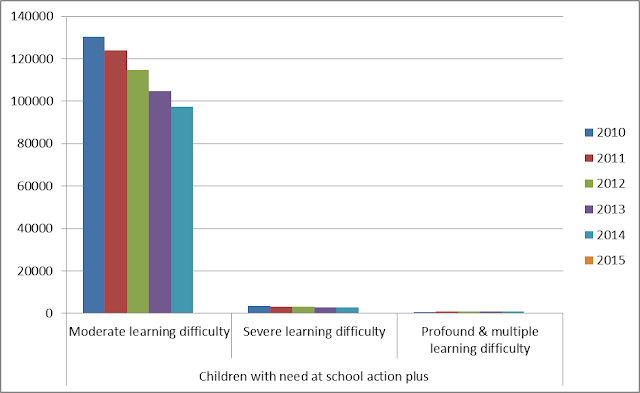 Of course, the figures are not likely to be completely equivalent, although other information which I will discuss in a later blogpost strongly suggests to me that this drop cannot be completely accounted for by missing out from the official statistics people who were ‘known’ to councils but who were not receiving social services support. And even if this drop were due to people ‘known’ to services but not getting long-term support being left out of these statistics, their omission is ominous. In the world of official statistics and service support, it’s a short step from being uncounted to not officially existing. 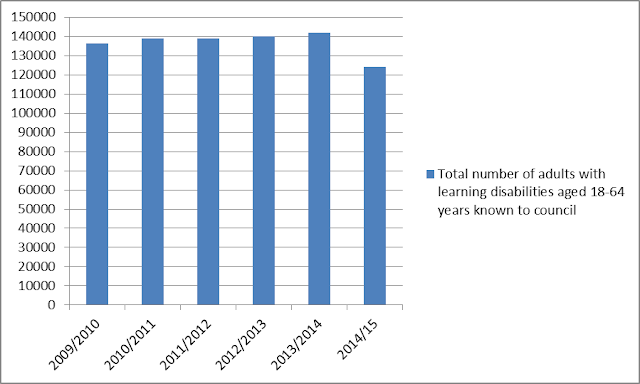 What does it all mean? Well, to me there is a clear pattern that throughout education and adult social services, people who would formerly have been officially identified as a person with learning disabilities are being ‘disappeared’ from service recognition and responsibility. Obviously the people themselves do not cease to exist (and a label of learning disabilities may not always be the most helpful way to support someone). But I do wonder if we’re seeing another of the periodic big historical shifts in the population of people who officially ‘count’ as people with learning disabilities. This shouldn’t be surprising – changes in the population of people given the label of learning disabilities (or historical, pejorative near-equivalent labels) have historically tended to follow big social changes, and a time of designed austerity may be no different in this respect.

In Victorian times, rapid industrialisation and the movement of people to cities can be argued to have ‘created’ a whole new population of people coming into the category equivalent to ‘learning disability’. Edwardian moral panics, allied to a eugenic approach, led to the equivalent of ‘learning disability’ being used as a moral label as much as anything else, with another shift in the population caught in this label. The moral connotations of the label dropped away somewhat throughout the 20th century, but the rise of the welfare state supported people with what would now be a label of ‘mild’ learning disability.

With the current reform/withdrawal/dismantling of the welfare state, perhaps we’re seeing an officially sanctioned (if implicit) shrinkage of who counts as a person with learning disabilities, with people with ‘mild’ learning disabilities being written out of the picture and state support reserved for ‘protecting’ the most ‘vulnerable’. My worry is that this retrenchment is consigning generations of people to a fight for survival in education, employment, housing, health and social contexts that are anything but conducive to a flourishing life.