"Why be happy when you could be normal?" On ordinariness and people with learning disabilities

“Why be happy when you could be normal?” On ordinariness and people with learning disabilities

The question is the title of Jeanette Winterson’s brilliant, fiercely honest account of her childhood (covering in unvarnished form similar terrain to “Oranges Are Not The Only Fruit”) and some of its consequences for her throughout her life. The question is put to her as a teenager by her adoptive mother, and for me encapsulates neatly some of the central dilemmas faced by people with learning disabilities in relation to ‘ordinary living’.

For people with learning disabilities, ordinariness has been a consistent rallying call, at least since the early days of ‘normalisation’ and the institutional closure movement. What ‘ordinariness’ means, it seems to me, has often been defined in opposition to the segregated and often institutionalised lives that people with learning disabilities all too often (still) find themselves living. So ordinary living is often described as living in an ordinary house, on an ordinary street, doing ordinary things like having a job, shopping and having the same kinds of fun that other people have – as opposed to being shut away somewhere institutional and remote from other people with all your activities taking place within and determined by staff who control you.

This is a rhetorically powerful way of highlighting the iniquity of segregated, institutional lives for people with learning disabilities, and was important in various strands of the institutional closure movement. One way in which ordinariness was picked up was a strong (and retrospectively naïve?) view that behaviours were environmentally determined. Bluntly, if institutions begat institutional behaviour, then ordinary houses in ordinary streets would beget ordinary behaviour. Another way in which ordinariness was and is still used is that ordinariness is seen as a set of skills that people with learning disabilities have to learn before they earn the chance to live in ‘ordinary’ environments. Possibly arising from its roots in the normalization movement, ordinariness here can seem perilously close to respectability, and assumes inclusion as an always withdrawable privilege contingent on ‘good behaviour’ (why does this sound like a suspended prison sentence?).

Despite the undoubted successes of the ordinary living movement, the life experiences of people with learning disabilities as a population are still very different from other citizens, certainly in England. Every year the Learning Disabilities Public Health Observatory produces a (very long) compendium of all the national statistics we can find relating to people with learning disabilities in England. The latest report concerns 2011/12, and is available here ( www.ihal.org.uk/publications/1185/People_with_Learning_Disabilities_in_England_2012 ; some extra data not available for 2011/12 is in www.ihal.org.uk/publications/1063/People_with_Learning_Disabilities_in_England_2011 ).

As I’ve briefly mentioned in a previous blog, people with learning disabilities are often seen to be ‘obtrusive’ (the term of sociologist Erving Goffman) within highly urbanized societies – often behaving in ways that show insufficient deference to tightly drawn social mores and routines. Despite all our attempts to make people with learning disabilities ordinary, many people just don’t seem to want to knuckle down to behave like truly ordinary people living ordinary lives in ordinary places.

As usual in these blogs, I’m stretching the argument almost to the point of caricature, but it’s in the service of two hopefully serious points. 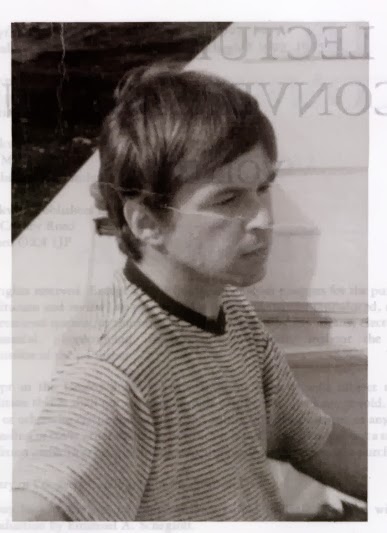 The first point I want to try and make is that thinking of ordinariness as a set of skills that people with learning disabilities sometimes struggle with is to misunderstand what ordinariness is and do people with learning disabilities a grave disservice. A short book chapter about ordinariness has nagged at me for years. It’s ‘written’ (it’s actually a transcribed lecture) by one of my intellectual heroes, Harvey Sacks. What’s not to like? A sociologist in the late 60s/early 70s, working in Berkeley, California – OK he died young in a car crash, but his recorded and transcribed lectures were sufficient, through the further work of acolytes and colleagues, to found a whole discipline of analytic elegance, rigour and immediate relevance to the real world, conversation analysis. And he was quite the handsome chap (see picture right). Envious, moi? Sadly I'm more like the chap below... 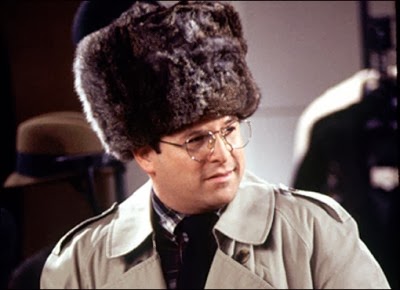 Anyway, Harvey Sacks' chapter is called “On Doing ‘Being Ordinary’”, and from the first time I read it, the potential implications for people with learning disabilities struck me, but not in a way I could clearly articulate. Let me give you some excerpts from the chapter that will hopefully illustrate Sacks’ argument:

“Whatever you may think about what it is to be an ordinary person in the world, an initial shift is not to think of ‘an ordinary person’ as some person, but as somebody having one’s job, as one’s constant preoccupation, doing ‘being ordinary’. It is not that somebody is ordinary; it is perhaps that that is what one’s business is, and it takes work, as any other business does.”

“If, for example, you are in prison, in a room with no facilities at all; say, it has a bench and a hole in the floor and a spigot; then you find yourself doing things like systematically exploring the cracks in the wall from floor to ceiling, over the years, and you come to have information about the wall in that room which ordinary people do not have about their bedroom wall…But it is not a usual thing to say, well, this evening I am going to examine that corner of the ceiling.”

“Of course it is perfectly available to anybody to spend an afternoon looking at a wall. You could choose to do that. If you take drugs, you are permitted to do that. But unless you take drugs you would not find yourself allowed to do it, though nobody is around. That is to say, being an ordinary person that is not a thing you could allow yourself to spend the day doing. And there is an infinite collection of possibilities, of things to do, that you could not bring yourself to do. In the midst of the most utterly boring afternoon or evening you would rather live through the boredom in the usual way – whatever that is – than see whether it would be less or more boring to examine the wall or to look in some detail at the tree outside the window.”

In my reading of this chapter, ordinariness isn’t a set of skills that need to learned and applied, but instead something like a job, a job which most people take extremely seriously and a job where ‘ordinariness’ is closely monitored and policed by ourselves and others around us on a continual basis. It seems to me this has two big implications for people with learning disabilities.

First, maybe ‘ordinariness’ (as in the prison example above) simply isn’t available for many people with learning disabilities to do. A life spent wholly or partly in segregated environments, where you know the label of learning disability is having a massive impact on your life but nobody talks about it, people treat you oddly, and you spend the days in effect counting the bricks of your prison cell, has little of the ‘ordinary’ about in terms that connect with general ideas of ‘ordinariness’.

Second, to put it bluntly, what’s in it for most people with learning disabilities in doing ‘being ordinary’? While there are clearly costs in not doing being ordinary, in being obtrusive, maybe there are benefits too; opting out of the rat race, being able to pursue your own interests without having to hide their non-ordinariness, maybe even having a little fun? Many people with learning disabilities are acutely aware of their place in socioeconomic hierarchies, and of the stigma they experience.

The statistics earlier in this blog suggest that an ‘ordinary’ life for a person with learning disabilities in England at the moment isn’t the most attractive of vacancies. And in the increasingly unequal society that England is becoming, even the most assiduous work at doing being ordinary, if you are a person with learning disabilities, is likely to land you somewhere very near the bottom of the socioeconomic pile of inequality. The diagram below is redrawn from Richard Wilkinson’s 2005 book ‘The Impact of Inequality’, and models the effect of income inequality on psychological well-being. Why wouldn’t anyone want to opt out of that particular chain of misery to preserve their sense of self? 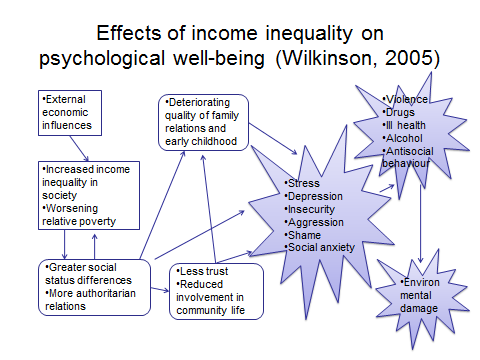 Following on from this, the second point I want to make is that maybe framing ordinary life as an achievement and ambition for people with learning disabilities is the wrong ambition to set. For most people, ordinary life is the unexamined routine bedrock of what happens in their lives. The only times I tend to hear people craving for ordinariness is after a major shock or traumatic event, and then it’s not a craving that seems to last for very long (when I was discussing this blog with my wife, she was horrified by the idea that anyone would want to be ordinary). For me, the very idea of ordinariness as a goal for people with learning disabilities is defined (and limited) by its opposition to people’s institutional histories (which of course, are still a clear and present reality for many people with learning disabilities). If institutions had never existed, would policies for people with learning disabilities be framed in terms of an ordinary life, or in different terms that all citizens would recognise for themselves as being ones that they would want to sign up to? This isn't to say that a decent home, a meaningful job, all those aspects of ordinariness, do not apply, it's more that they are the foundations for building a good life rather than the good life itself.

So without ordinary living, what alternatives do we have (without us all trying to hitch-hike to Haight-Ashbury and set up a commune)? Well, for a start we could do a lot worse than making common cause with the type of general disability rights agenda so eloquently summarised by @neilmcrowther (see http://makingrightsmakesense.wordpress.com/2014/01/04/refreshing-the-disability-rights-agenda-a-future-imagined/ ), an ambitious agenda to support “disabled people’s right to be in the world” on people’s own terms. As @maxneill put it, in one of his tweets that lodges and flowers in the brain long after I’ve read it, “We need communities where we don’t have to always agree to belong: Where we already belong and are free to think differently.” The opposite of segregation isn’t ordinariness, it’s inclusion.

I think it’s also important to work towards reducing inequality in our society generally. Young people with learning disabilities are facing in acute form many similar consequences of inequality currently faced by other young people; unemployment or highly insecure, meaningless part-time employment; increasing pressure to stay with parents long beyond the time you want to (and they want you to); endlessly deferred aspirations to a home or a family of your own; and a creeping sense of hopelessness. A more equal society opens up spaces for all of us to look up from our shoes and be a little more ‘obtrusive’, and to find meaning in our lives that includes paid employment but is not wholly defined by it. Inclusion is freedom; not only for people with learning disabilities but for everyone not to be quite so ordinary.