Through the round window

This week, for the first time the MyNHS website published some information on services for people with learning disabilities in England, broken down to the level of individual Clinical Commissioning Groups (CCGs). The relevant webpage is here – although I found it quite slow to load, it did work for me in the end. 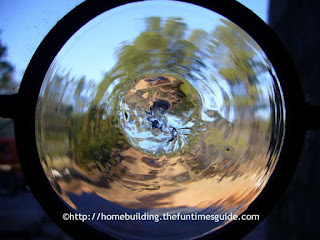 Although knowledge is not necessarily power, any steps towards transparency are to be welcomed, and although I don’t know this I guess the hand of Dominic Slowie behind it. Dominic will be much missed as National Clinical Director for Learning Disabilities. In this blogpost I simply want to describe what information has been published online to help people understand what is (and isn’t) there when looking up their local CCG area.

There are two types of information published online here (a much wider set of information about people with learning disabilities broken down by local authority area in England is available here). 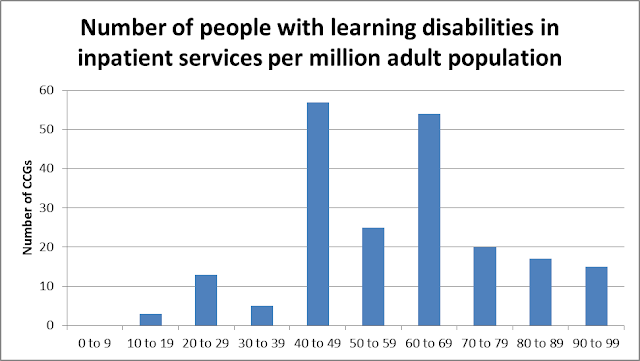 A second caveat is that information is set against individual CCGs when it has been provided collectively. For example, all the CCGs across Cumbria and the North East report the same number of people per million (92, the highest numbers in the dataset) – presumably some individual CCGs have lower numbers and some have even higher numbers. Finally, given the pressure CCGs are under from NHS England to cut inpatient service numbers, it’s important to bear in mind the ‘Daisy Unit’ phenomenon. The Daisy Unit is a newly built 9-bed unit in the grounds of a psychiatric hospital, for people with ‘complex’ learning disabilities to ‘receive specialised services’. But apparently it’s not an inpatient unit, it’s a ‘specialist residential home’. Coincidentally it’s been commissioned by Wiltshire CCG, an area with the joint lowest inpatient numbers in the country according to this online information.

The second type of information reported online is the percentage of people with learning disabilities identified in GP registers who had an annual health check. The median figure for this was 46.5%, so just less than half of people identified as a person with learning disabilities with their GP got an annual health check in the ‘average’ CCG. Again, the graph below shows huge variation between CCGs. Apparently, if you live in the area of Coastal West Sussex CCG (13%), you are 6.5 times less likely to have had an annual health check than if you live in the area of Eastern Cheshire (85%). 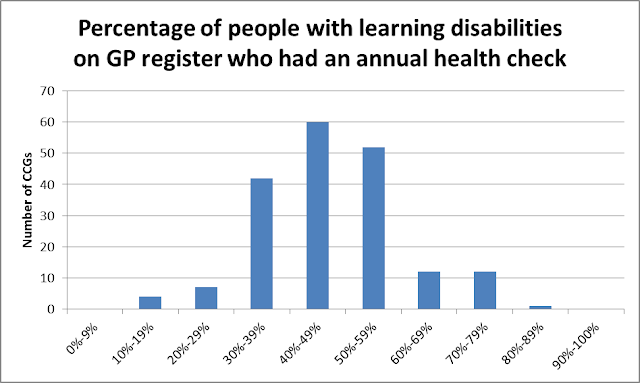 Again, there are a few things to bear in mind when trying to make sense of your local area. First, in fully 19 CCGs (9.1% of the total number of CCGs), their information was so bad that a percentage could not be calculated. Second, in the year reported, the age range of people of learning disabilities eligible for an annual health check changed from 18+ years to 14+ years, so some areas may not have been very well prepared for this. Third, if a local area is better at actively finding and registering people with learning disabilities on GP registers their percentage is likely to go down (as the number ‘under the line’ gets bigger). The online information does report the total number of people with learning disabilities registered with GPs so it’s worth looking at that as well as the overall percentage.

One thing I haven’t mentioned is the first column in the webpage, a ‘panel assessment’ of CCGs when it comes to services for people with learning disabilities. The headline figures are that 192 CCGs (91.9%) were rated as ‘needs improvement’, 16 CCGs (7.7%) were rated as ‘performing well’, and one CCG (0.5%) was rated as ‘greatest need for improvement’. Because the panel only had two bits of information to go on, their rating system seems quite straightforward – if a CCG was reported as having less than 20 people with learning disabilities per million in inpatient services (3 CCGs) OR if a CCG was reported as hitting 70% of more of people with learning disabilities getting an annual health check (13 CCGs) they were rated as ‘performing well’. As long as you’re doing well on one of these indicators, you can be doing badly on the other one and still be ‘performing well’. With only two bits of information, I’m not sure how useful this panel rating is, to be honest.

Hopefully this blogpost is useful if you’re interested in looking up your local CCG. Whether these first steps towards transparency are really designed to improve the accountability of CCGs to their local populations, well that’s another question.
Posted by Chris Hatton at 10:23 2 comments: