As report after report documents the experiences of autistic people and people with learning disabilities in ‘specialist’ inpatient units across various parts of the UK, the policy response in England has gone down the route of a ‘taskforce’ for children and young people, and all adults having their ‘care’ reviewed in the next 12 months, with both of these processes overseen by independent chairs. As has been widely pointed out, the focus of both these initiatives on case reviews as a mechanism for getting people out of inpatient units is not new – various iterations of government and NHS England policies such as Transforming Care have had exactly the same focus for at least 8 years.

We also know that NHS England have already gone through at least one major push to move people out of inpatient units, in the lead-up to the ‘end’ of a/the Transforming Care programme in March 2019. In this blogpost I want to go through some of the statistics collected by NHS Digital to see what we can learn from this previous major push by NHS England – what happened, and what might the consequences be?

To begin with, let’s look at the overall numbers of autistic people and people with learning disabilities in specialist units over time. The graph below is taken directly from the report using Assuring Transformation data (collected from commissioners, which they can update retrospectively, and on a relatively restricted set of ‘specialist’ inpatient services compared to another dataset, the MHSDS) up to December 2019.

In this graph, the grey line shows the number of people who commissioners reported straight away were in inpatient units. This shows a very gradual decrease over time, with no apparent acceleration towards the ‘end’ of Transforming Care in March 2019. The blue line adds in people who commissioners reported were in inpatient units retrospectively (so someone in an inpatient unit in March 2019 might only be reported to NHS Digital in June 2019, bumping up the numbers for March 2019 later on). In the left-hand side of the graph, where enough time has passed for commissioners to hopefully report everyone, there is a consistent gap between the grey line and blue lines. Towards the extreme right-hand end of the graph it looks like there is an accelerating decrease in numbers, but I think that is because commissioners haven’t yet reported everyone they’re going to find retrospectively, so the number of people in the blue line for recent months will increase as more people are found/reported by commissioners. 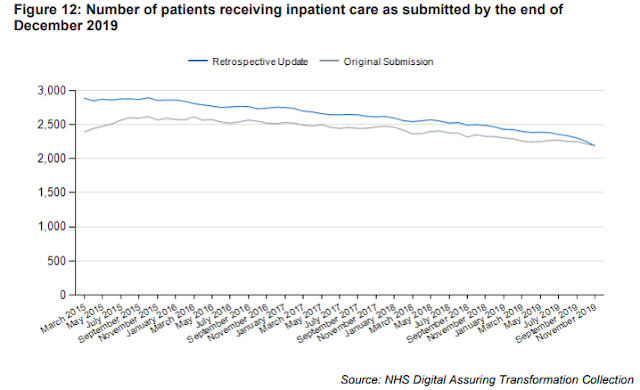 What might we see if there was a concerted push to get people out of inpatient units? To start with, people in inpatient units should be having regular reviews (remember, this is the mechanism in the new announcements that is supposed to trigger people leaving inpatient units). The graph below shows the time since people’s last review for people in inpatient units, from March 2015 to September 2019. There is some evidence of a push on reviews in March 2019 (the end of Transforming Care), with more people having more recent reviews, but by September 2019 it looks like the time since last review is drifting back to its usual level. 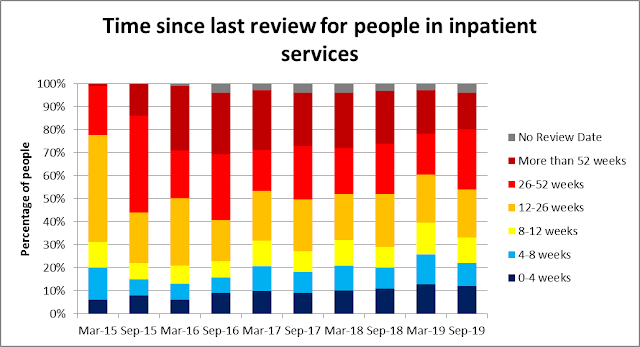 You can also see in the graph below that, over time, steadily more people in inpatient units have been the subject of Care and Treatment Reviews (CTRs), introduced to try and bring both commissioner and independent voices into the decision-making process about people leaving inpatient units, although again there be evidence of a slight drift backwards after March 2019. 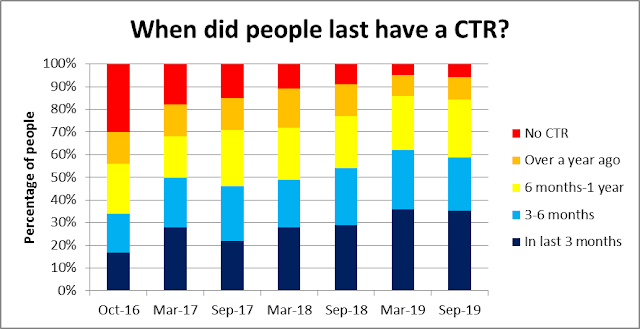 Are these reviews having an impact on people getting a planned date for transferring out of the inpatient unit they are in (bearing in mind that a transfer may be to another inpatient unit, which I’ll come to later). The graph below shows that after a real dip in 2016, over half of people in inpatient units had a planned transfer date, although that has again dipped back to under half in September 2019, six months after the end of Transforming Care. 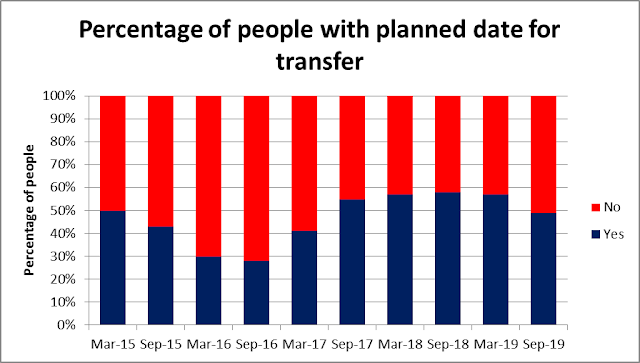 If someone does have a planned date for a transfer out of an inpatient unit, how soon are they expected to move? The graph below shows the time to the planned transfer for people in inpatient units. I think there is real evidence here of a push towards shorter times to planned transfers in the two years before the end of Transforming Care in March 2019, although again there has been a drift backwards since. It’s also worth noting that this push seemed to have little impact on the proportion of people whose planned transfer was overdue  - this has stayed pretty steady over time. 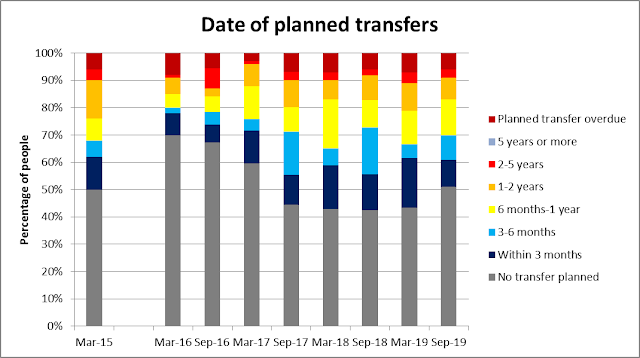 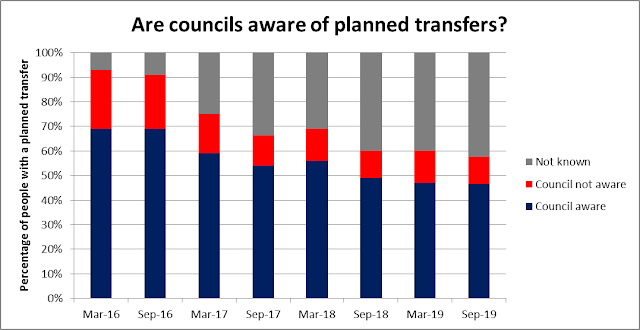 Another marker of the quality of a transfer plan in the statistics is the range of people who have agreed a person’s transfer plan. As the graph below shows, over time the proportion of transfer plans that have been agreed by the person themselves, by a family member or carer, by an advocate, by the service provider’s clinical team, or by the service commissioner (!) has plummeted over time (with a particularly steep drop from September 2018 to March 2019). 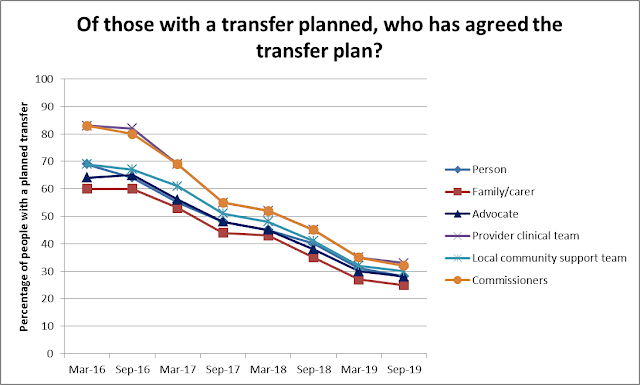 So there was a push in terms of reviews and planned transfers, but some suggestion that these pushed transfer plans might be cutting corners. What was the impact of this push on the number of people actually moving out of inpatient units, and where were people going? The graph below shows the destinations of people transferred from an inpatient unit, in blocks of a year from October 2015 to September 2019. In terms of overall numbers the picture is positive, with more people year-on-year moving to community settings, particularly the family home ("with support", although many families report not getting the support they need). Overall, fewer people (although still 20% of all people transferred in 2018-19) were being ‘transferred’ directly to another inpatient unit or hospital. 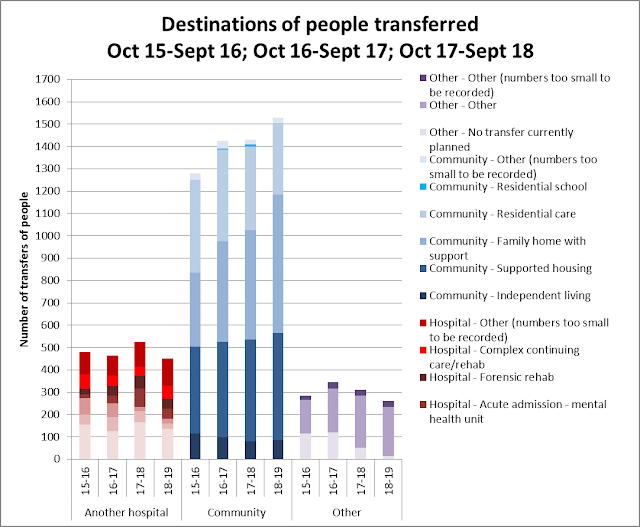 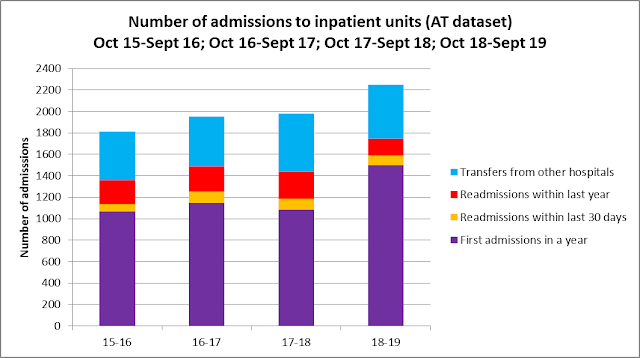 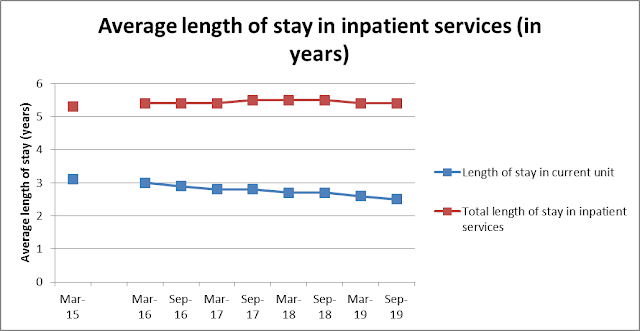 The final question is whether this push had an impact on the number of people in inpatient units who, according to their care plans, didn’t need to be there? The short answer, according to the graph below, is no. For around four years, around 30% of people in inpatient units (28% in September 2019) are recorded in their care plans as not needing inpatient care, with the number of people experiencing delayed transfers of care slightly drifting upwards over time. 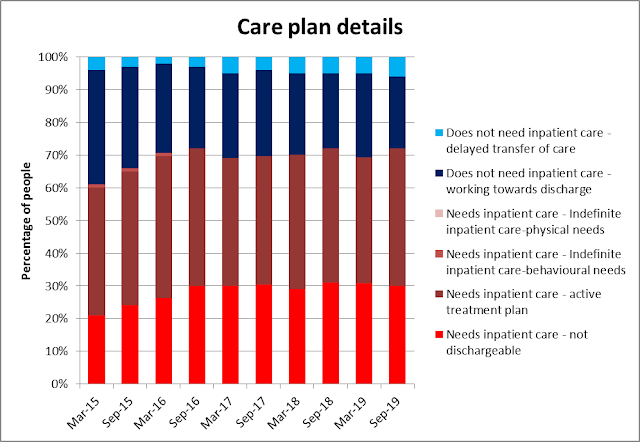 So what do I think are the lessons we can learn from the kind of ‘push’ that has already happened at least once, towards the end of Transforming Care in March 2019, and that policy announcements say are going to happen again?

1) Such a push can have an impact on reviews being done, and notional transfers being planned, although the system drifts back to its usual ways of working once the foot is taken off the pedal.

2) Such a push might cut corners when it comes to planning and organising sustainable transfers out of inpatient units that will result in people being well supported and moving towards a fulfilling life.

4) Such a push does result in more people moving out of inpatient units, although the sustainability of their living situations once out is unclear and a substantial proportion of people are being readmitted to inpatient units within a year of leaving.

Based on this evidence, the new initiatives announced in late 2019 are unlikely to have the transformative effect claimed for them.

I’ve been very remiss with blogposts, and due to a lack of time and headspace I’ve been providing updates on statistics relating to people with learning disabilities in very occasional tweet threads.

Rather than spend ages agonising about writing proper, considered blogposts, I thought over the next month or so I’d try and get some of those tweet threads into quick blogposts so at least the information will be in one place and people can refer to them if they wish to.

So, to kick off here is a very quick blogpost about disability benefit statistics, with figures mainly up to February 2019. All these figures are obtained from the excellent DWP Stat-Xplore online tool. I’m going to talk about three disability benefits here:

2) Attendance Allowance (AA), which is paid to disabled people over the age of 65 to help with personal care. This can be paid at two rates to reflect the level of care required, and in the statistics uses the same broad definition of ‘learning difficulties’ as the DLA statistics.

3) Personal Independence Payment (PIP); a benefit for adults with sickness and/or disability replacing the DLA, but with some important differences. Information on the PIP is available on a monthly basis for adults with learning disabilities, under the category ‘Main Disabling Condition/Psychiatric Disorders/Learning Disability Global’, and for autistic people under the label ‘Main Disabling Condition/Psychiatric Disorders/Autistic Spectrum Disorders’.

In this blogpost I’m trying to get a sense of how many people with learning disabilities and autistic people (I’m assuming that the broader category of ‘learning difficulties’ is mainly these two groups of people) have been getting some form of disability benefit over time. To help with this, I’ve looked at four broad age groups: children and young people (age 0-17 for DLA); younger working age adults (age 18-44 for DLA; age 16-44 for PIP); older working age adults (age 45-64 for DLA and PIP); and older adults (age 65+ for DLA, PIP and AA). The graphs include people getting payment for the benefit concerned, and are either people with ‘learning difficulties’ (DLA and AA) or, separately, people with learning disabilities and autistic people (PIP). 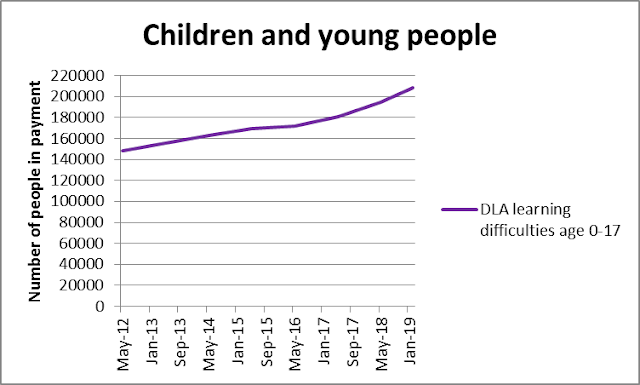 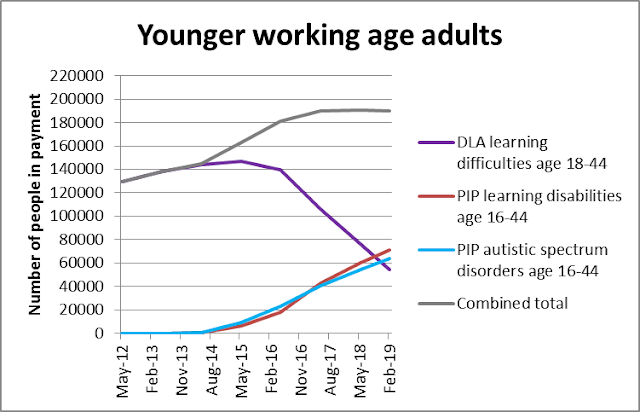 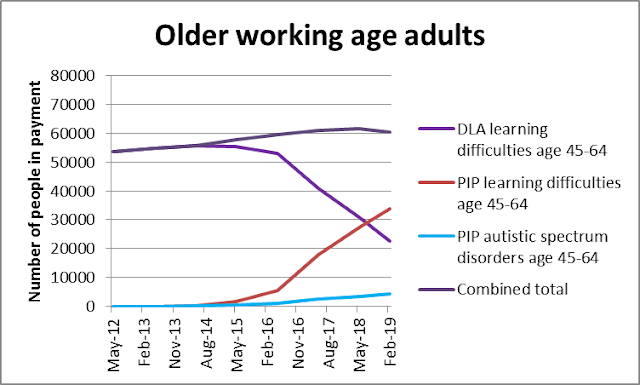 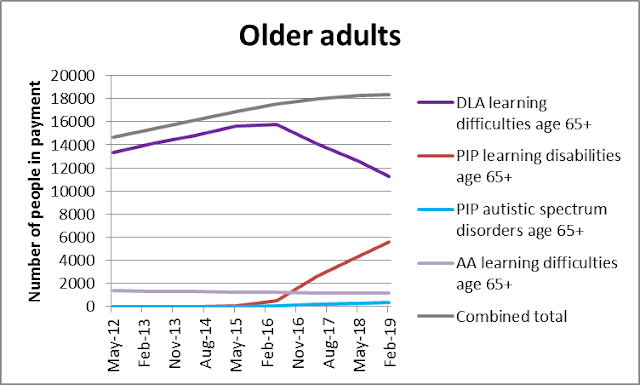 I’m very happy for others to make more informed interpretations of these statistics than me, and I’m very happy to people to tell me about errors I have made in putting together the information for this blogpost. From my limited understanding of the statistics in these graphs, a couple of things leap out at me:

1) The increasing numbers of children and young people with ‘learning difficulties’ getting DLA is in sharp contrast to the number of adults of all ages getting some form of disability benefit. Is this because autistic children are more likely to be recognised and deemed to be eligible for DLA? And what happens when these children and young people grow up and have to go through the process of transfer to PIP?

2) It looks to me like fewer adults of all ages are eligible for PIP than have been eligible for other disability benefits in the past, so previous increases in the number of adults getting some of disability benefit (which you would expect from population predictions of the number of adults with learning disabilities) have stalled in all adult age groups. It might be worth mentioning here that according to DWP statistics, since the introduction of PIP, 8.1% of PIP applications related to people with learning disabilities and 32.6% of PIP applications related to autistic people that have been ‘cleared’ by the DWP PIP process have been disallowed post-referral due to ‘failing’ the assessment.

Overall, if population predictions are correct there should be more people with learning disabilities and more autistic people of all ages over time becoming eligible for a disability benefit. The figures here suggest that while we are still seeing this for children and young people (where PIP does not apply), we are no longer seeing it for adults of any age. What are the consequences of this for all those people who should be getting a disability benefit to help them flourish, both now and in the future?
Posted by Chris Hatton at 19:30 No comments: