It's institutional disablism - deal with it

Today saw the publication of a landmark study by Australian academics Julian Trollor, Preeyaporn Srasuebkul, Han Xu and Sophie Howlett on deaths amongst a cohort of 19,362 people with learning (intellectual) disabilities in New South Wales, Australia. Their findings are in BMJ Open here, and are free to download and read. This article in the Sydney Morning Herald is also a really good summary, and there is an easy read summary here. 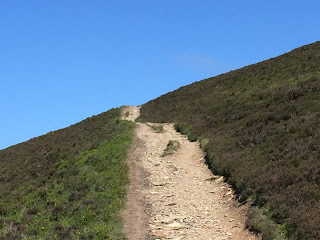 Why did I write that these findings are depressingly familiar? Because similar findings have been found in other countries, wherever people have looked. In England (see Chapter 3 here for a free recent summary), the median age of death for people with learning disabilities is 13-20 years younger for men and 20-26 years younger for women compared to the general population, with the gap in life expectancy not closing over time. There are consistent gaps in age of death for people with learning disabilities compared to the general population reported in the USA, Canada, Ireland and Germany, with some variation in just how yawning the gaps are.

In England, in large part due to the #JusticeforLB campaign and other campaigners, health service ‘regulators’ have begun to pay reluctant attention to the deaths of people with learning disabilities within health services, and how health services do or don’t investigate people’s deaths. The shocking report by Mazars into how Southern Health NHS Foundation Trust (the health service where LB died) determinedly and repeatedly didn’t investigate the deaths of people with learning disabilities who died in their ‘care’ laid out just how a health organisation can operate in ways to deny reality and systematically denigrate anyone who tries to bring a dose of reality to their proceedings.

One of the broader health service institutional ‘responses’ to this report was a piece of work by one of England’s health service regulators, the Care Quality Commission, looking at how health services investigated the deaths of people with learning disabilities and/or mental health issues. This resulted in the report Learning, Candour and Accountability published in December 2016. Over time I more and more have the sensation of being shocked but not surprised at these kinds of reports. The CQC summarised the main findings like this: “We weren’t able to identify any trust that demonstrated good practice across all aspects of identifying, reviewing and investigating deaths, and ensuring that learning is implemented”. More specifically:

So, despite national frameworks and guidance on investigating and reporting deaths, and a generally high national profile on candour and accountability since the Francis report into mid-Staffs, the entire health service and regulatory system operates in a way that makes the deaths of people with learning disabilities invisible and unaccountable. And these aren’t random variations in practices where there is uncertainty about what to do; they are practices heavily weighted towards the extremely shoddy end when it comes to the deaths of people with learning disabilities.

Isn’t this surely a basic, convincingly evidenced indicator of systemic institutional disablism? I’m using this phrase as analogous to the phrase ‘institutional racism’ used by Sir William McPherson in his judicial inquiry into the death of Stephen Lawrence. Institutional racism was defined in the inquiry as:

“The collective failure of an organisation to provide an appropriate and professional service to people because of their colour, culture, or ethnic origin. It can be seen or detected in processes, attitudes and behaviour which amount to discrimination through unwitting prejudice, ignorance, thoughtlessness and racist stereotyping which disadvantage minority ethnic people”.

Within the wide array of health services in England (and likely in other places too, given the international similarities in evidence concerning the health inequities experienced by people with learning disabilities), isn’t this what we’re seeing when it comes to people with learning disabilities? (I’m fairly certain similar arguments could and probably have been made with respect to other groups of people, such as people with mental health issues, other groups of disabled people, or older people with dementia). I’ve added ‘systemic’ because it’s not a single organisation, and I'm aware there are issues around the use of 'disabilities' rather than 'impairments' that need more careful thinking through:

Systemic institutional disablism is the collective failure of organisations to provide an appropriate and professional service to people because of their learning disability. It can be seen or detected in processes, attitudes and behaviour which amount to discrimination through unwitting prejudice, ignorance, thoughtlessness and stereotyping which disadvantage people with learning disabilities.

Does it matter if we call this out as systemic institutional disablism? I think it does. One of the things that disappointed me about the CQC Learning, Candour and Accountability report is that it identified the issues very clearly, but couched its recommendations in terms of technical changes to systems, on the assumption that systemic poor practice is a function of professional lack of knowledge, inattention and honest confusion. In England there have also been multiple initiatives to improve various aspects of healthcare for people with learning disabilities, all operating on similar assumptions.

But I think there is something crucial missing. Professionals within health systems have had sufficient evidence for some now – ignorance and inattention can no longer be used as reasons/excuses – indeed they can be seen as further signs of institutional disablism. As can be seen from the Home Affairs Committee report into McPherson – 10 years on, the term institutional racism was resisted by many in the police and has been the cause of deep discomfort. Progress in response to the McPherson inquiry has also been patchy and uneven. But this discomfort, self-questioning, and willingness to see the systemic whole in terms of institutional disablism is urgently needed if health services are to achieve any much-vaunted step changes in how people with learning disabilities and their families are treated. Isn’t seeing the problem the first step?
Posted by Chris Hatton at 13:09 4 comments:

In the ongoing debate about the Transforming Care programme in England, a distinction is often made between inpatient services described as Assessment and Treatment Units (ATUs) and inpatient services variously described as secure and/or forensic. The argument sometimes follows from this that Transforming Care should be focused on reducing/closing the number of ATU places (largely commissioned by CCGs), because secure/forensic inpatient services (largely commissioned by NHS England specialist commissioning teams) are always going to be needed for some people with learning disabilities and/or autism. Personally, I’m not sure such a sharp distinction is possible, desirable, represents reality, or necessarily means that we need the amount of secure/forensic inpatient services that exists today.

The first graph below shows the number of people with learning disabilities and/or autism in different types of inpatient service (as labelled in the Assuring Transformation dataset), for March 2015, December 2015, May 2016 and November 2016. In November 2016, the most common type of inpatient service was ‘secure forensic’, containing (a word I use advisedly) around half of all people within the Assuring Transformation dataset (1,725 people, 50.6%). ‘Acute learning disability’ services (in effect ATUs) contained 460 people (18.3%), followed by complex care/rehabilitation services (330 people; 13.1%). ‘Forensic rehabilitation’ services weighed in with 120 people (4.8%), 155 people (6.2%) were in ‘acute generic mental illness’ inpatient services, and a further 180 people (7.1%) were in inpatient services described as ‘other specialist’ or ‘other’. The extent to which some of these esoteric distinctions between service types is meaningful, particularly to the people placed within them, is a question there to be asked, I think. 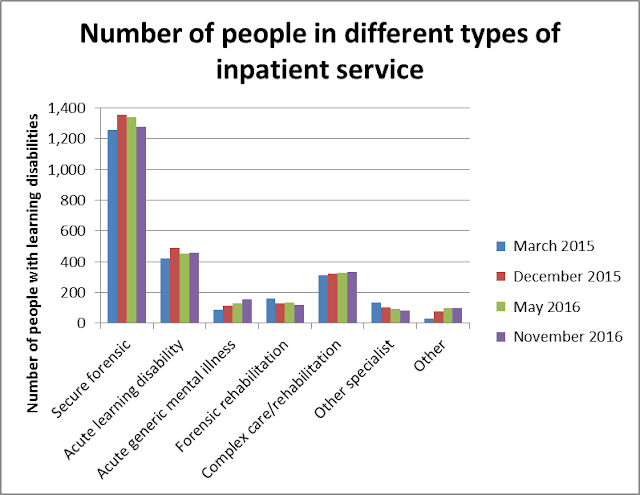 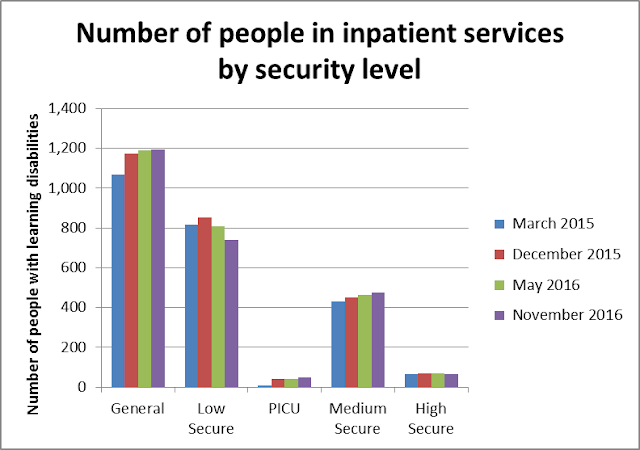 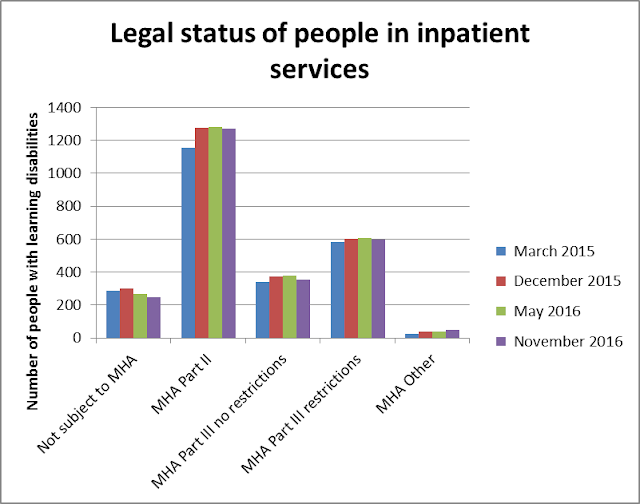 So far this post has shown the types of inpatient service that people are in, their levels of security, and the legal status of people within them. All of these show a very diverse picture. Are there any clues about whether services that are more secure/forensic are clearly different from services that are less secure?

The Assuring Transformation data analysis offers a couple of hints. The first is in the graph below, which shows for November 2016 the legal status of people within inpatient services at different levels of security. If more secure/forensic services are doing the job claimed for them, we would expect most people within them to be under Part III sections. We would also expect general/low secure inpatient services not to have people under Part III sections (particularly those with Ministry of Justice restrictions), as services at this level of security shouldn’t be able to manage people with these apparent levels of ‘risk’.

The graph below does show that medium and high secure services do largely contain people sectioned under Part II and Part III of the Mental Health Act. Low secure units have a similar profile to more secure units, although the numbers of people in low secure units are greater overall (there are as many people in low secure units under Part III sections with restrictions as there are in medium and high secure units combined). Even general inpatient units, while weighted more towards people there ‘informally’ or with Part II sections, still contain substantial numbers of people with Part III sections, both without restrictions (80 people) and with restrictions (120 people).
This information certainly shows that most people under Part III sections are in general/low secure services (600 people) rather than medium/high secure services (350 people). Is this because there aren’t enough medium/high secure inpatient services and they are desperately needed, or is it because less restrictive options are possible (most importantly, outside inpatient services altogether)? 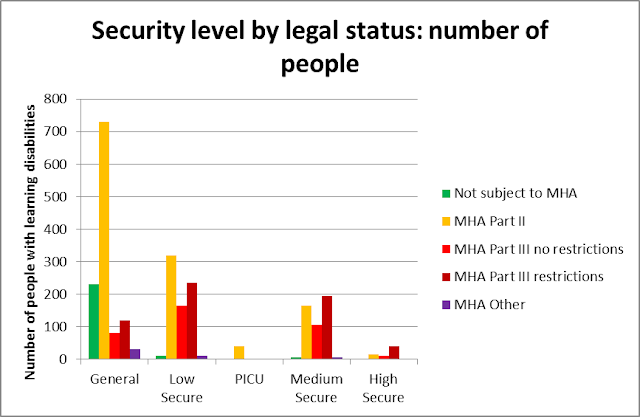 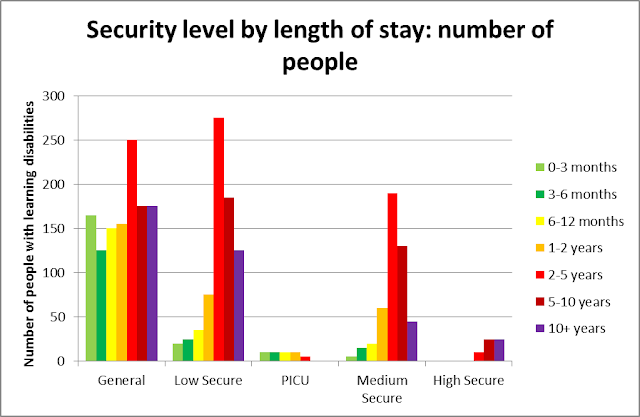 Overall, it really doesn’t look like the different parts of the learning disability inpatient service complex are highly specialist and set up to deal effectively with different groups of people with different problems. Looks like we need assessment and treatment of the complex inpatient service system itself – why is the challenging behaviour of this system so persistent? A first start would be to ask what functions does this system serve, and for whom? Cui bono?
Posted by Chris Hatton at 14:36 3 comments: