Invisible Cities: The city of children 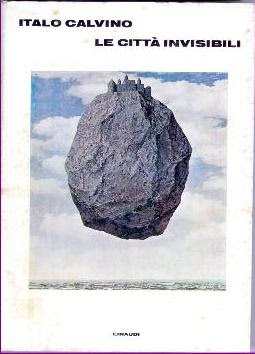 There are invisible cities in England. You can’t see them very easily, but thousands (some say millions) of people live in them, not usually by choice (they don’t tend to be holiday destinations). Here I want to give you a quick tour of the Invisible City of Children.

How many children live in the invisible city?
No-one knows quite how many children live in the city, but until recently it was probably not far off a quarter of a million children. In recent times children in the city have been vanishing, with the number of children in the biggest suburb of the city, the Emeldee district, dropping by about a quarter over the last 4 years (to around 130,000 in 2014). No-one is quite sure what’s happened to them. Although the suburbs are much smaller, the number of children in the Eseldee and Piemeldee districts is continuing to slowly increase (around 31,000 and 10,600 children respectively).

Education
Most children in the Emeldee district (88%) go to school outside the city, with just 12% of these children in the city’s ‘special’ schools. Most children in the Eseldee (78%) and Piemeldee (83%) districts stay in the city’s ‘special’ schools for their education. Over the last few years, more children in all districts are staying in the city’s schools rather than going elsewhere for their education. There is also a shadowy network of ‘special’ boarding schools, often on the outskirts of the invisible city – no-one knows how many children are in these boarding schools, but in 2011 the estimate was around 800 children (most of whom are weekly boarders, coming home to their families at weekends).

Children in the invisible city are less likely than other children to say that they like school, find school interesting, or say that they are happy at school.

There is virtually no higher education in the invisible city.

Poverty
The invisible city on the whole is less wealthy than the rest of England. Over 35% of families in the Emeldee and Eseldee districts are eligible for free school meals, as are over 25% of families with a child in the Piemeldee district. In the rest of the country, between 15% and 20% of families with a child are eligible for free school meals. Families in the invisible city are also more likely to stay in poverty for longer than families outside the city.

A minority of children in the invisible city show signs of being distressed – again this is more likely to happen in the city than elsewhere in England. This is also the case for their parents.

The future
Unlike children in other parts of England, who typically start carving out an imagined future for themselves during their teenage years, children and families in the invisible city are discouraged from imagining their future lives as adults outside the invisible city, in terms of a job, a home of their own, travel, friendships, someone to love and be loved by, and maybe a family of their own some day. Instead, a ‘transition process’ exists to prepare teenagers and their families for a life as adults in another invisible city.

Invisible? Yes. Inevitable? No.
There is no reason why this Invisible City of Children has to be like this – none of this is inevitable for children with learning disabilities and their families. With political and social will, this invisible city could be a place where all children are well educated, families live in good housing and have enough money to live good lives, and children have great social lives and are not subject to bullying and violence. In this city, children and families would be healthier and happier, and could imagine fulfilling futures for everyone. And, perhaps, the invisible barriers that act to create this invisible city would dissolve, so children with learning disabilities and their families can fully inhabit, alongside everyone else, the real cities, towns and villages where they live.

This is just a quick blog containing some data I came across today while rummaging amongst the information stored by the Health and Social Information Centre's excellent NASCIS system (http://www.hscic.gov.uk/nascis ).

I hadn't noticed before that the information relating to expenditure by social services (PSS-EX1 - notice the strategic use of the hyphen to avoid embarrassment when searching for it on Google) also includes information on income from 'client contributions' (see here for more guidance on what this means http://www.hscic.gov.uk/media/13520/PSS-EX1-Guidance-2013-14/pdf/PSS-EX1_Guidance_2013-14_v1.0.pdf ).

The graph and table below summarise the information on client contributions concerning social services for adults with learning disabilities aged 18-64 years, in England, from 2005/06 to 2013/14.

Overall, the black line on the graph takes the total amount of client contributions in 2005/06 and shows what this total would be over time taking into account inflation in the costs of social services (thanks again to the Personal Social Services Research Unit and Lesley Curtis in particular for their invaluable work compiling these sorts of statistics http://www.pssru.ac.uk/project-pages/unit-costs/2014/ ). As you will see, client contributions have broadly increased in line with inflation, although the 2013/14 figures might suggest client contributions beginning to rise faster than inflation. 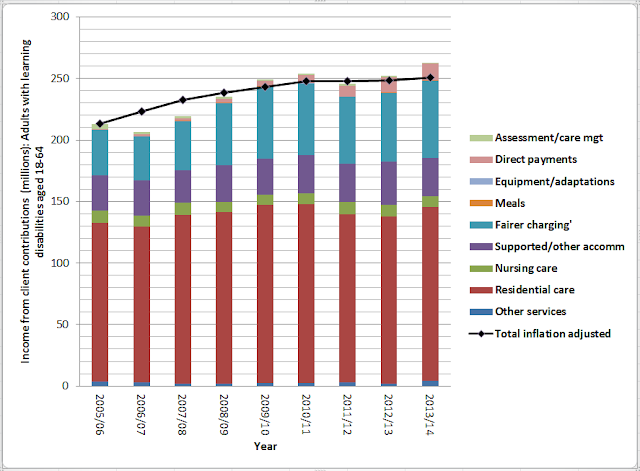 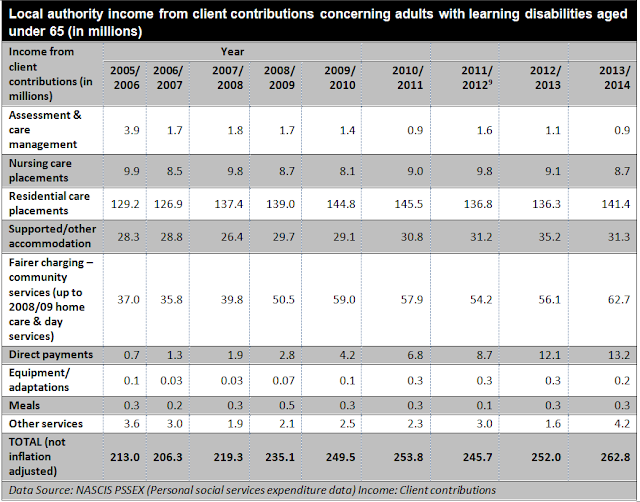 I don't know enough about what this information means to want to make any strong comments about it at this point and I'd like to hear people's thoughts on it. £262.8 million is certainly a big chunk of money - what do people make of this amount, what client contributions are being spent on, and how this is changing over time?

Update: I've just been looking through some provisional results from the Adult Social Care Survey for 2013/14 (see here http://www.hscic.gov.uk/catalogue/PUB14386 ), which included responses 'from' 13,360 adults with learning disabilities (many people are 'helped' by support workers to complete the survey, so the results have to be taken with a Lot's wife of salt). According to this survey, 22% of adults with learning disabilities said that they buy some more care and support with their own money, and 10% of people said that their family pays for some more care and support for them.