The road to Fluster Gap 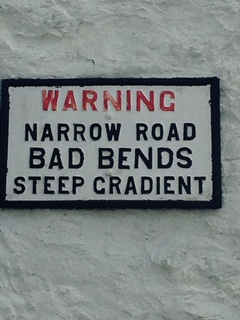 In her first blogpost as the new NHS England Director of Transformation – Learning Disabilities (see https://www.england.nhs.uk/learningdisabilities/2016/04/19/julie-higgins-2/ ), Dr Julie Higgins reported that the number of people in specialist learning disability inpatient units has started to fall, apparently from 2,795 people in March 2015 to 2,615 people in March 2016 (a reduction of 6.4%).

Obviously, this is an abiding preoccupation of the Transforming Care programme, and a question which I’ve returned to in this blog roughly every 6 months to check in on what’s happening. Is the tide really beginning to turn? Trying to answer this simple question is surprisingly difficult, for the reasons I outlined here 6 months ago (http://chrishatton.blogspot.co.uk/2015/11/impatient-inpatient.html ).

[I’m hoping that this makes some sort of sense so far?] 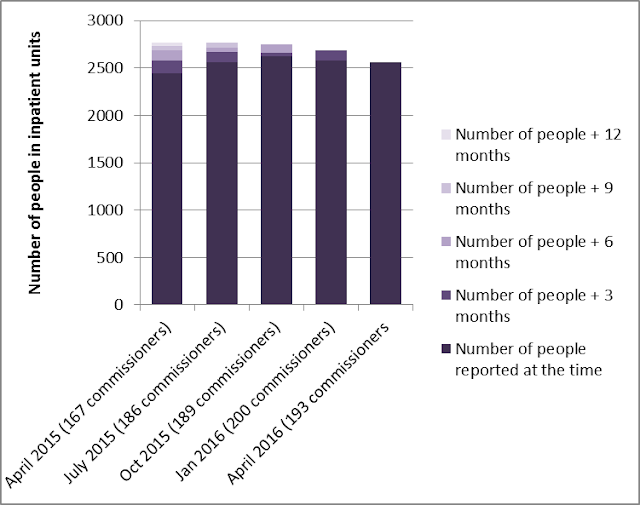 What does this graph show?

If we’ve got a stable, high number of commissioners reporting, does this mean that the initial reporting of numbers of people will more closely reflect the total number of people in inpatient services? Does this mean we can start to claim a (very gradual) drop in the number of inpatient service places for people with learning disabilities? Looking at the retrospective data, I think the answer is ‘not yet’.

I think this means we can’t take the 2,565 people initially reported in April 2016 as a final figure. Based on previous numbers being reported retrospectively, even with a nearly full complement of commissioners, I think we can expect well over 100 people to be added to this total. This would put the April 2016 total (something like 2,700 people) well within 100 people of the April 2015 total of 2,765 people.

Compared to the stated aims of Transforming Care, it feels (to steal a phrase) that we’re still waiting for the great leap forwards (https://www.youtube.com/watch?v=kjLXyqD3lvI ).

PS: The sign in the photo is on a road up and out of Heversham, a village near me, which does indeed have a house called Fluster Gap at the top of the hill.
Posted by Chris Hatton at 16:10 No comments:

Some statistics on children in learning disability inpatient services

From the Learning Disability Census 2015 (weblink here http://www.hscic.gov.uk/article/2021/Website-Search?productid=20487&q=learning+disability+census+2015&sort=Relevance&size=10&page=1&area=both#top ). This is run by the Health and Social Care Information Centre.

As of 30th September 2015, in total there were exactly 3,000 people in specialist learning disability inpatient services.

Assuring Transformation data
This is also collected by/creditable to the HSCIC (see weblink here http://www.hscic.gov.uk/article/2021/Website-Search?productid=20879&q=assuring+transformation+report+quarter+4&sort=Relevance&size=10&page=1&area=both#top ). The latest available information is collated for the quarter January - March 2016. Nearly all commissioners provide information now, which is an improvement, but a lot of them provide information late, so the current total number of people recorded in this dataset (2,615 people) will increase as people are ‘found’ by commissioners later on.