One Step Beyond: What do the latest statistics tell us about inpatient services and people with learning disabilities? 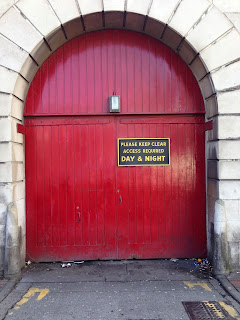 The Health and Social Care Information Centre (HSCIC) have today (22nd May) published two updates of statistics about people with learning disabilities in inpatient services in England. Both of these updates are based on information from English NHS commissioners, and are re-booted updates in a series previously published by NHS England.

The first update contains a range of information on the number of people in learning disability inpatient services from February to March 2015 (it’s not information for a full three months because the responsibility for collecting the information moved from NHS England to HSCIC in January). It’s available here http://www.hscic.gov.uk/catalogue/PUB17638/lds-1415q4-rep.pdf

The second update contains similar information (in less detail) on a month-by-month basis, reporting on the month of April 2015. This is available here http://www.hscic.gov.uk/catalogue/PUB17634/ldsm-apr-15-exec.pdf

There is more detail in both of them than I’m going to mention here, and I would recommend spending a bit of time looking at both updates if this is important to you. There are a few things that jumped out at me, mainly because they suggest that, as yet, large-scale reductions in the use of inpatient services are just not happening. 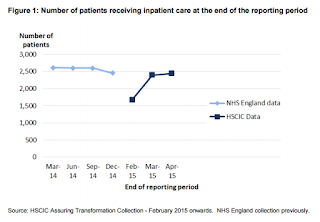 Given that a large majority (79%) of people are in general or low secure inpatient services, what are the apparent blockages to moving people out of inpatient services? According to people’s “care plans”, of the 1,480 people “needing inpatient care”: 510 people (21%) are “not dischargeable”, 945 people (39%) have an “active treatment plan”, and only 25 people (1%) require “indefinite inpatient care”.

This leaves 915 people (over a third of people in inpatient units, 38%) currently in inpatient services who “do not need inpatient care” according to their care plans, with 830 people “working towards discharge” and 85 having a “delayed transfer of care”. This number of people roughly corresponds to the 37% of people with a planned discharge date in the next 6 months, so if this cohort moves out of inpatient services (and is not replaced by new people) it should become visible in these statistics in the next 6 months.


Overall, while there improvements in what commissioners say they and providers are doing (for example in the number of people with plans to move out of inpatient units), as yet there is very little evidence that this is resulting in more people moving out of inpatient services, of fewer people moving in, and of inpatient services really changing what they’re doing. I also worry whether a cohort of 'easier' people are preparing to move out, with everyone else being prepared to be left where they are as 'undischargeable'. Let’s hope they are collectively feeling the heat from NHS England, to take One Step Beyond (see, I got there in the end – enjoy this https://www.youtube.com/watch?v=N-uyWAe0NhQ ).
Posted by Chris Hatton at 14:18 4 comments: