To accompany the #7daysofaction campaign, I’m going to try and write some very short blogposts looking at recent trends in what’s happening with learning disability inpatient services in England. This one looks at trends over a 10-year time period in the overall number of people in learning disability inpatient services, and the balance of NHS vs independent sector services over this time.

To do this, I’m using information from the Health and Social Care Information Centre Learning Disability Census, which ran annually from 2013 to 2015 and asked providers of specialist learning disability inpatient services in England lots of questions about their services and who was in them on the Census date (30th September). The latest reports for the 2015 Census have lots of useful information on trends from 2013 to 2015 (see here http://www.hscic.gov.uk/searchcatalogue?productid=19718&q=learning+disability+census+2013&sort=Most+recent&size=100&page=1#top and http://www.hscic.gov.uk/searchcatalogue?
productid=20487&q=learning+disability+census+2013&sort=Most+recent&size=100&page=1#top ).

The method for the Learning Disability Census was based on an earlier census of inpatient mental health services in England, called Count Me In, which from 2006 to 2010 also included inpatient services for people with learning disabilities. Very little information on people with learning disabilities was published in the Count Me In reports, but an IHaL report by Gyles Glover and Valerie Olson in 2012 provided a more comprehensive analysis of this information (see https://www.improvinghealthandlives.org.uk/publications/1161/A&T_and_other_specialist_inpatient_care_for_people_with_LD_in_the_Count-Me-In_census ).

The graph below shows the number of people in learning disability inpatient services in England from 2006 to 2015, according to whether they were in an NHS unit or an independent sector unit. Overall, the number of people with learning disabilities in inpatient units in England has dropped from 4,609 people in 2006 to 3,000 people in 2015, with earlier (and bigger) reductions reflecting the tail-end of ‘regular’ deinstitutionalisation – the eventual closure of the last ‘long-stay’ hospital campuses. [As an aside, it’s worth remembering that these campuses also required a real concerted push to get them closed, against considerable institutional inertia]. 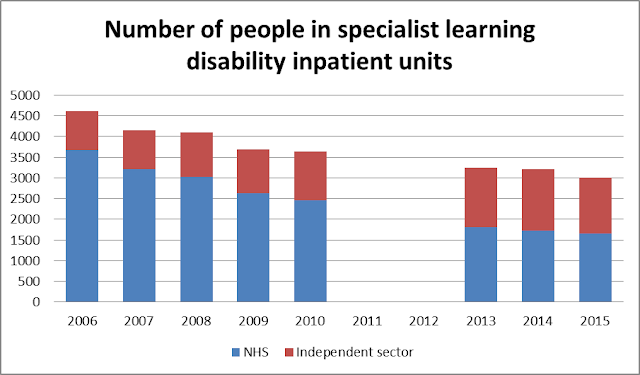 This blogpost isn’t going to be a paean to the virtues of the NHS – with #JusticeforLB how could it be? – and good or shockingly bad services are not the exclusive property of any organisational arrangement. #JusticeforLB is exposing how NHS services can be as rapacious and resistant to accountability as any imagined cigar-chomping venture care capitalist (an outdated stereotype now – maybe a desiccated smooth-suited coconut water drinking capitalist?).

But independent sector services operate to different (relaxed or absent) rules compared to the public sector – not least in terms of freedom of information legislation. In theory, the independent sector is also even less bound to general policy priorities than NHS services, and as profitable businesses are not in the business of closing themselves down – although if it no longer turns a profit, they can close themselves down at the flip of a coin without any thought to the people within those services.

As the ‘structure’ of health care in England becomes more and more like a Jackson Pollock painting, this drift towards the independent sector is likely to be the result of hundreds of local (possibly panicked) decisions being made all around the country by commissioners, NHS services and NHS England, rather than the desired outcome of a national plan. But is this drift going to be (yet another) obstacle in the path to closing these services?
Posted by Chris Hatton at 07:18