An employment gap as big as the Ritz

This post is an update of a post I did nearly a year ago focusing on the paid employment of people with learning disabilities, mainly using social care statistics for 2015/16 that have been recently released.

This relatively short post focuses on paid employment. Although the way these statistics are collected changed in 2014/15, comparisons over time are relatively straightforward. And it’s important to realise that these statistics are only for ‘working age’ (age 18-64 years) adults with learning disabilities who up to 2013/14 were ‘known’ to councils, and from 2014/15 onwards were getting ‘long term support’ from councils (discussed here). 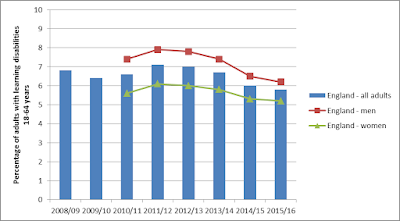 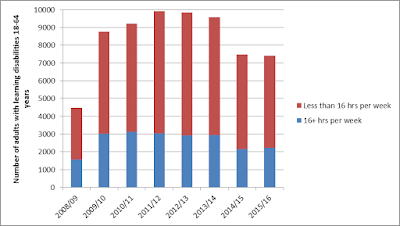 And what of those working age adults with learning disabilities getting long-term social services support who are not in paid employment? This information has started to be collected from 2014/15, and is in the graph below. 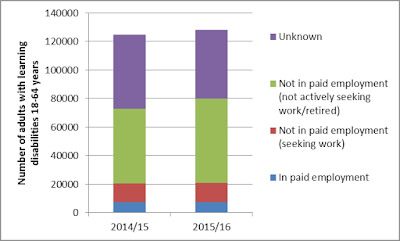 What does this add up to?

Second, adults with learning disabilities are not sharing in any general improvements in the jobs market – in fact, paid employment is continuing to get worse rather than better for people with learning disabilities. Where are access to work, supported employment, further education, public health initiatives with employers, and public sector organisations as employers? Are they in fact getting in the way rather than supporting people into decent paid work?

Third, do the figures on the number of people not in paid employment map on to significant differences in benefits and sanctions regimes between people ‘seeking work’ (13,375 people) and people ‘not actively seeking work’ (59,010 people)? And the number of people with learning disabilities reported in these statistics are a drop in the ocean compared to the ‘hidden majority’ of adults with learning disabilities were are presumably also subject to these benefits and sanctions regimes?

Fourth, the huge number of adults getting long-term support from councils where councils don’t know their employment status is an indicator of councils’ priorities when it comes to employment, and of the shoddiness of their methods for collecting this information. I’ve heard a few fairly hair-raising stories about individual councils which I won’t share here, but let’s just say it doesn’t inspire confidence.

Isn’t this the fabled territory of the win-win? Councils may deserve our sympathy for the scale of the cuts they’re having to preside over, but boy they don’t half make it difficult sometimes.
Posted by Chris Hatton at 09:37