The ghost of evidence past, present and future - Stinky Pete speaks

I’m worrying about the increasing rate at which people contact me to ask if there is any evidence that small, community-based housing is associated with better lives for people with learning disabilities compared to care homes and institutions. My first realisation is that I’m now into the ranks of the academic Stinky Pete old-timers, whose fading memories are dredged for ancient scrolls beyond the reach of a SIRI request (“I did research on this 20 years ago, young grasshopper…”). 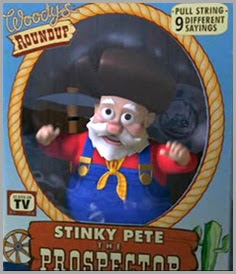 My bigger worry, however, is that this generational forgetting leaves organisations who should really know this stuff defenceless against waves of attacks on the very idea of independent living (in a disability rights sense) coming from some ‘service providers’ building 48-person ‘supported living units’ (see Mark Neary’s recent blogpost about this https://markneary1dotcom1.wordpress.com/2017/04/27/squeeze-em-in/ ) and local authorities looking for reasons to warehouse people on ground of economies of scale (see this NDTi blog from Rob Greig https://www.ndti.org.uk/blog/rochdales-transformation-of-learning-disability-services ).
So, a quick recap on what the evidence says. There has been loads of research about this across the UK and other countries, most of it linked to the closure of the big long-stay hospitals but some of it looking at different ways of supporting people with learning disabilities beyond long-stay hospitals. Most of this research, in the UK at least, is at least 10 years old.

The table below (from a systematic review by Walsh and colleagues, published in 2010) summarises what the research evidence from 67 research studies said at the time (I don’t think it would be much different now), either from studies that had followed people out of long-stay institutions (the ‘deinstitutionalization studies’) or from studies that had compared people living in different types of community-based housing (the ‘postdeinstitutionalization’ studies – never use one word when one REALLY LONG word will do instead). 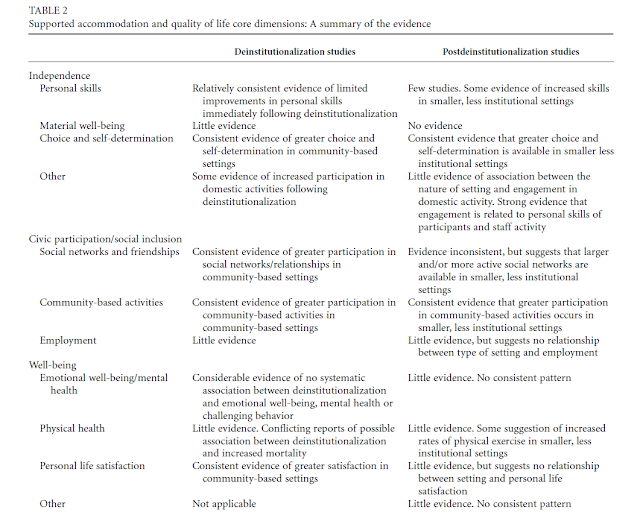 There were/are a lot of gaps in the research evidence, but what is obvious from this table is that institutions are never, ever better in any aspect of people’s lives than community-based alternatives (the mortality evidence comes from one set of Californian studies where the methods used to derive the conclusions have been hotly contested). In a few areas of people’s lives (‘challenging behaviours’, for example), community-based housing support services are no better than long-stay institutions. But in most areas of people’s lives (like people using the skills they have, more choice over aspects of their own lives, doing more stuff inside and outside the person’s home, and people being more socially connected), life outside long-stay institutions is better.

Also, for many (but not all) aspects of people’s lives (like exercising more choice, more social connections, doing more outside the home, possibly more physical exercise), smaller supported living houses are better than larger residential care homes or group homes.

So far, so straightforward. But there a few things to remember. In the research evidence reviewed here, lots of important stuff (like people’s disposable income, or what people think of their neighbourhoods) was hardly measured. Using long-stay institutions as a basis for comparison also sets the bar very low – it doesn’t take much to show someone’s life is better than in an institution, although that person’s life may be way short of what they, you or I would consider to be a decent quality of life.

A third thing is variation. There was very little variation across different long-stay institutions – people’s lives on the measures used in these studies were consistently not good (I’m trying to be measured here). In residential care homes and supported living services, however, there was a lot of variation in people’s lives across different homes supposed to be of a similar ‘type’, such that for some people life in a care home or supported living would be indistinguishable from life in a long-stay institution. Why do some people in similar-looking places have better lives than others?
Unsurprisingly the biggest factor is how well people are supported to get involved, active, and do the things they want to do. It also seems that people who need more support to do stuff or people with ‘challenging behaviour’ are less likely to get support that enables them to have a really good life.

Is any of this relevant to where we’re at now? Well, yes and no. Although I can’t believe this needs to be restated, long-stay institutions are really bad places for people to be. Overall, it’s also the case that smaller is better. But living in an ordinary house is not enough – people need others to support them in ways that people actually find useful, rather than obstructive. To me, ‘specialist housing’, with rounded edges or whatever wannabe service providers are claiming is necessary for people with learning disabilities, really seem to be expensive and unnecessary – more decent accessible housing open to anyone where people with learning disabilities have legal rights as tenants or owners is much more efficient in all sorts of ways.

There are also an awful lot of gaps. When this research was done, the very idea of a 48-bed ‘supported living’ unit would have been seen as an oxymoron. As an excellent series of recent NDTi reports has shown (see https://www.ndti.org.uk/resources/publications/housing-choices-discussion-papers for the first one), old ways of classifying ‘service types’ are becoming in some senses meaningless, certainly to the people living in them. Is a 48-bed supported living unit an institution, an ensuite residential care home, supported living, an intentional community, or what? The only way to find this out is to find out what people’s lives are like, and how people are being supported to live their lives vs what barriers/restraints are being imposed on people that get in the way.

Research in the UK about this, with a couple of honourable exceptions, has severely dwindled and not kept pace with how services are changing. Perhaps even worse, why aren’t local authority commissioners collecting or demanding this kind of information before they start making disingenuous cases for warehousing people? Why aren’t more big service providers collecting proper information about the impact of their own services on people’s lives and how to improve what they do? These people claim to be specialists – well, show your evidence or shut up with your disingenuous quality of life talk as a cloak for disinvesting from people’s futures.