A whole new raft of social care statistics relating to 2016/17 came out last week from NHS Digital. This includes statistics on the number of working age adults with learning disabilities getting long-term social care support who are in paid/self employment, according to councils. The statistics are available here http://digital.nhs.uk/catalogue/PUB30122 although they’re a bit scattered this time around. 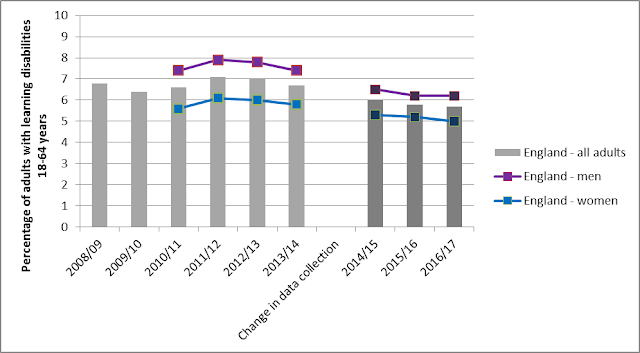 
Even with this caveat, the statistics on employment show that things are getting (even) worse. The grey bars in the graph show that by 2016/17, only 5.7% of this population of working age adults with learning disabilities were reported by councils to be in any form of paid/self employment, no matter how part-time. This has dropped even from 2014/15, when the employment rate was 6.0%.
The gender gap in employment rates has also persisted; the purple line shows that in 2016/17 6.2% of working age men with learning disabilities were in paid/self employment, compared to 5.0% of women (the blue line).

If this is really a policy priority, it would be good to see some concrete evidence of it.

[Update: in the original version of this post, I cited the overall rate of employment as 5.2% when it is 5.7% - I have corrected this. 5.2% is the median employment rate looking across local authorities].
Posted by Chris Hatton at 17:28