The BBC Panorama exposure of how people with learning disabilities were abused by staff was over 7 years ago now, and despite the ongoing ministrations of Transforming Care the litany of abusive practices in ‘specialist’ learning disability inpatient units and residential care homes continues to the present day, and no doubt into the future.

Given what has happened at Winterbourne View and beyond, a central concern of the Transforming Care programme should be to ‘transform’ what actually happens to people in inpatient services. How many people, how often, experience different types of ‘restrictive intervention’ – physical restraint (including prone restraint where people are pinned to the floor), seclusion (solitary confinement), mechanical restraint (being physically contained so you can’t move), or being subjected to heavy duty medication? And that’s before you take into account self-harm or being physically assaulted by other people in the same place as you.

Government initiatives since Winterbourne View have clearly said that the use of these ‘restrictive interventions’ should be minimised and, in the case of prone restraint, stopped altogether (https://www.gov.uk/government/publications/positive-and-proactive-care-reducing-restrictive-interventions ), and that the kinds of medications used in these inpatient services (mainly antipsychotics and rapid tranquilisers) should be seriously reduced as well (https://www.england.nhs.uk/learning-disabilities/improving-health/stomp/ ).
So there is a clear steer about what should be happening. What is actually happening in these inpatient units? Are things getting better?

From 2007 to 2015, we got a pretty regular picture of what was being done to people in inpatient units from a census that was carried out on all people in inpatient services for people with learning disabilities and/or autistic people in England. This blogpost from a couple of years ago summarises this information https://chrishatton.blogspot.com/2016/04/adverse-experiences.html . Overall, by September 2015:

What has happened since 2015, now that Transforming Care has taken shape as a national programme? In public, silence. The regular inpatient census was stopped in 2015, on the grounds that other sources of information would take up the slack so we didn’t need the census any more. The Assuring Transformation dataset, which NHS England uses to count the progress or otherwise of Transforming Care, doesn’t include anything about ‘restrictive interventions’, assaults, or self-harm.

Another dataset, however, does. The Mental Health Services Dataset (MHSDS) is collected from mental health service providers (both NHS and independent sector) about everyone using their inpatient mental health services, and for a couple of years information has been flagged about people with learning disabilities and/or autistic people in these services and reported alongside the Assuring Transformation data (https://digital.nhs.uk/data-and-information/publications/statistical/learning-disability-services-statistics ). The coverage of people and services in the Assuring Transformation dataset and the MHSDS overlaps but is not the same:


The MHSDS is a big beast of a dataset, and it collects A LOT of information, including:

This information has never been released specifically focusing on people with learning disabilities and/or autistic people in mental health inpatient units. However, the redoubtable Lucy Adams of BBC Scotland has obtained this information from NHS Digital for the File on 4 programme ‘Transforming Care – Is It Working?’ which you should be able to find here https://www.bbc.co.uk/programmes/m0000mkd  File on 4 itself and an article in the Guardian (https://www.theguardian.com/society/2018/oct/02/physical-restraint-used-on-50-more-nhs-patients-with-learning-disabilities ) have covered the main messages coming out of this information – this blogpost provides a bit more of a detailed look at the numbers released by NHS Digital.

The first graph below shows the total number of restraints that people with learning disabilities and/or autistic people in mental health inpatient units have been subjected to, for the calendar years of 2016 and 2017. The figure for 2018 has been projected from figures provided for the first 5 months of 2018. 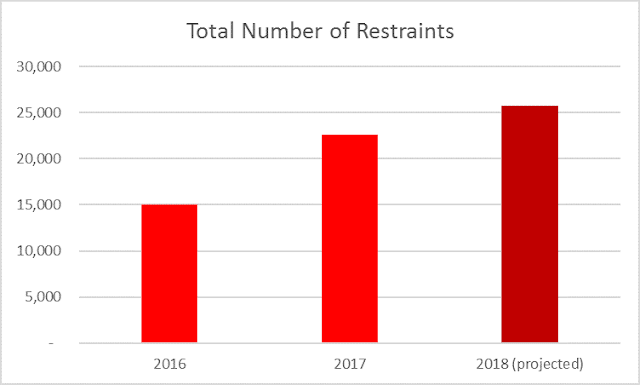 In 2016, people were recorded as being subjected to restraint on 15,065 occasions. In 2017 this figure had increased by exactly 50%, to 22,620 restraint ‘episodes’. If the projected figures for 2018 are right, the number of times people are restrained is set to increase even further, to 25,812 episodes.

The next graph below shows the particular types of restraint that were recorded for people with learning disabilities and/or autistic people in mental health inpatient units. 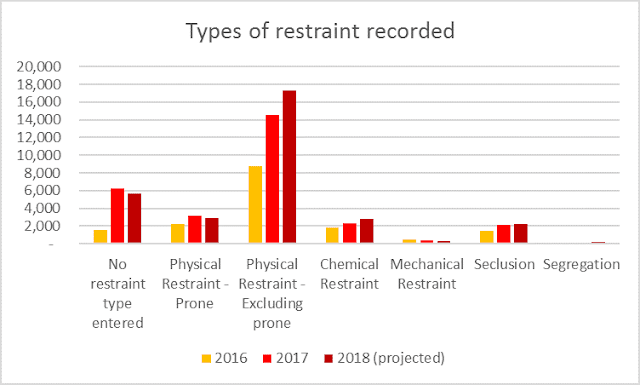 Chemical restraint (this is where people are given medication on spot, in addition to any prescribed antipsychotic or other medication they may be on) of people happened 1,880 times in 2016, increasing to 2,360 times in 2017 and projected to rise further to 2,830 times in 2018.

One of the many things that worries me about this information is the large and increasing number of restraints that aren’t recorded as any particular type of restraint; from 1,590 episodes of restraint in 2016, to a massive 6,260 in 2017 (over a quarter, 28%, of ALL restraints recorded) and a projected 5,700 in 2018. Why should this be so, if the recording of restraints is supposed to be improving? And what types of restraint is this coding hiding – are the numbers of prone restraints even higher than these figures suggest?

The final graph below shows the number of reported assaults and episodes of self harm that people experienced, both of which are high and rising. 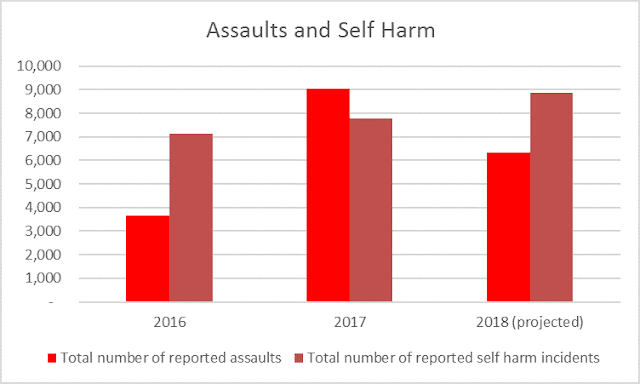 The number of assaults experienced by people with learning disabilities and/or autistic people in mental health inpatient units 3,685 in 2016, increasing hugely to 9,050 in 2017 and currently projected to be 6,350 in 2018.

What do these statistics tell us? They are not comparable with the earlier information from the inpatient censuses because they report the number of episodes rather than the number of people experiencing them, the categories used to report restraint are different, and the types of services included overlap but are not the same.

But they are shocking statistics. Types of restraint which aren’t supposed to happen at all, such as prone restraint, are both common and seemingly increasing. Other forms of restraint, and experiences such as assault and self harm, also seem to be on the increase. Can it be because there is now better reporting (why did it take so long? What on earth was happening before?) – if so then why is the type of restraint not recorded for over a quarter of restraint episodes? Are there more people with learning disabilities and/or autistic people in inpatient services – this is not what NHS England are telling us.

One of the things I find most disturbing, though, is that these figures would never have seen the light of day without the BBC being persistent in getting hold of the information. These statistics are vital for the public to understand what is happening with Transforming Care, but they were (and are) being kept secret. They could also be used to understand a lot more that would be useful to the Transforming Care programme, but there is no sign that NHS England or others are using this information to inform what they are doing. How do independent sector units compare to NHS units? What about different types of unit? How are people doing in generic mental health inpatient units – a large group of people that should be central to Transforming Care but that seem to be completely ignored.

These habits of secrecy and defensiveness do no favours to the effectiveness of the Transforming Care programme, and do a great disservice to people with learning disabilities and/or autistic people and their families. There is no reason for it – transparency will not kill, but the opposite might.