Crushed by the wheels of industry? If only...

This post is the second in a haphazard series looking at what’s happening for people with learning disabilities in England, mainly using social care statistics for 2014/15 that have been recently released (see http://www.hscic.gov.uk/catalogue/PUB18663 ) .

This relatively short post focuses on paid employment. Although the way these statistics have been collected have changed for 2014/15 compared to earlier years, comparisons over time are relatively straightforward. And it’s important to realise that these statistics are only for ‘working age’ (age 18-64 years) adults with learning disabilities who up to 2013/14 were ‘known’ to councils, and in 2014/15 were getting ‘long term support’ from councils (see http://chrishatton.blogspot.co.uk/2015/11/the-disappeared.html for a discussion of this). 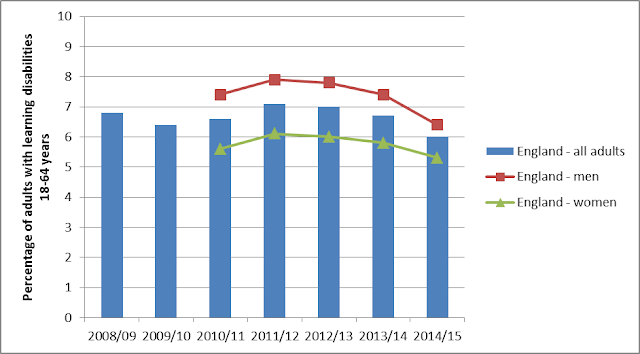 Statistics concerning employment rates for adults identified as having learning disabilities as children but not identified as such in adulthood are obviously hard to come by. Using a large-scale population survey to estimate employment rates for adults likely to be part of this ‘hidden majority’, we estimated that 15% of these adults were in employment for 16+ hours per week, compared to 58% of the comparative population in the survey (Emerson, Hatton, Robertson & Baines, 2014).

The graph below shows the number of working age adults with learning disabilities in any form of paid employment (data on the number of people engaged in voluntary work is also available up to 2013/14, but has not been collected in 2014/15). The number of people in any form of paid employment has dropped by a quarter in three years, standing at just 7,430 people in 2014/15. [It is important to note that the 2008/09 data were only collected over a half-year, so they’re not great for comparison purposes] 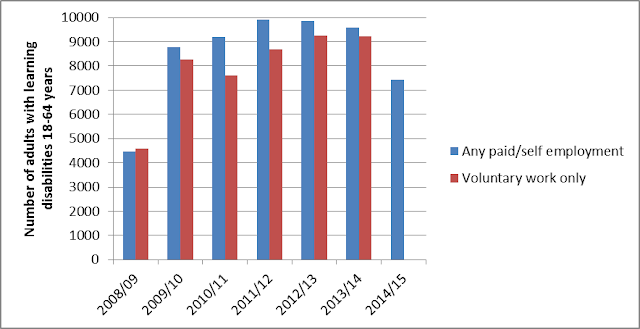 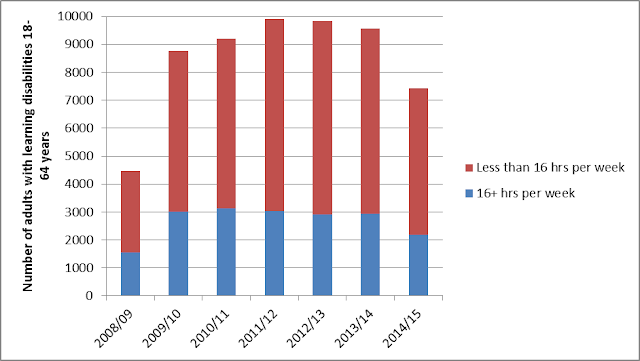 And what of those working age adults with learning disabilities getting long-term social services support who are not in paid employment? In 2014/15; 11,920 people were recorded as actively seeking work (and potentially liable to benefit sanctions?); 51,095 people were recorded as not actively seeking work; and councils didn't know the employment status of 53,020 people to whom they are ostensibly providing long-term support.

One of the things I find particularly depressing about these statistics is that this is an area where there is good evidence on how to support people into paid employment, and how cost-effective supported employment can be if you do it right (see the NDTi reports and resources on this here http://www.ndti.org.uk/major-projects/current/employment-support-for-disabled-people1/ ). Yet according to the survey NDTi did as part of their research, many local authorities are withdrawing funding for supported employment.

Work might not be everything, but it is something. Instead of people with learning disabilities having to pay agencies to work under the guise of ‘therapy’ or ‘work experience’, why not actually, erm, pay people for the work they do?