Well, on a nerd point, one big thing that’s happened is that the HSCIC have continued to try and improve the quality of the data they have. This leads to some complications when interpreting trends. This graph from the HSCIC executive summary neatly shows the problem. 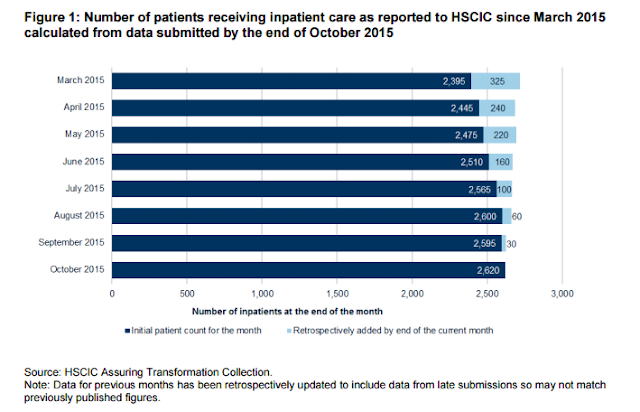 The dark blue bars show the number of people in learning disability inpatient services steadily increasing over time (from 2,445 people in April 2015 to 2,620 people in October 2015) – this is based on the number of people that commissioners reported at the time. There are two reasons why this increase is hard to interpret though.

The second issue is in the light blue bars in the graph. As well as reporting the number of people for that month, commissioners can retrospectively report people in inpatient services that they didn’t report at the time - presumably people they’d only just found out about. These numbers are reported in the light blue bars. For April 2015, this adds 240 people (10%) to the number of people reported at the time. Each month, more and more retrospective people are added to the numbers, sometimes from several months back.

This means that we can’t interpret the overall numbers of people reported with learning disabilities in inpatient services as reducing over time either. Although the headline numbers drop from 2,685 people in April 2015 to 2,620 people in October 2015, by next April it’s possible that commissioners will have retrospectively added something in the order of 200-300 people to the October 2015 numbers.

Bearing all these caveats in mind, what is clear is that there has been no really significant drop in the number of people with learning disabilities in inpatient units over the past six months.

There are some other worrying snippets that are hard to square with the latest NHS England/LDA/ADASS strategy “Building the right support”, more widely known I think as “Homes not hospitals” (see https://www.england.nhs.uk/wp-content/uploads/2015/10/ld-nat-imp-plan-oct15.pdf ).

First, only 575 people in inpatient services in October were reported to have a plan involving moving to ‘the community’ (this includes varieties of supported living and living with families), with a further 390 people having a plan to move to residential care. Most of the rest of people with a transfer plan (and bearing in mind that these plans don’t have to have discharge dates attached), have a plan to move to another variety of inpatient service.

Finally, there were 860 people in October 2015 where the local authority was not aware of a planned transfer to their local area. This may be because many people being ‘transferred’ are actually being transferred to other inpatient services, but it’s worrying in the light of the latest social care statistics that local authorities only report supporting 490 adults with learning disabilities in inpatient settings (see http://chrishatton.blogspot.co.uk/2015/11/social-care-its-not-complicated-any-more.html ). Despite the LGA/ADASS/NHS England strategy making much of its invitation to pool budgets across health and social care, a 'transformation fund' and a promise of dowries for those living in inpatient services for 5 years or more, it’s doubtful to me whether under the cosh local authorities are going to play.

I fear more Daisies on the horizon, a “home” for people for whom “living at home is not an option” (see http://www.awp.nhs.uk/news-publications/trust-news/2015/october/new-service-will-bring-vulnerable-adults-back-home-to-wiltshire/ ). As the Director of Quality for Wiltshire CCG describes it:

“This innovative service aims to provide individualised care and support for Wiltshire residents who have a complex learning disability with a mental health condition or display behaviours that challenge. This is a local residential setting which will encourage individuals to maintain their family relationships, build a fulfilled life through participation in the community and access mainstream services when required to ensure that their health and social care needs are met.” (see http://www.wiltshireccg.nhs.uk/news/new-learning-disabilities-service-to-launch-in-wiltshire )

This is a nine-bedded ‘home’ being built in the grounds of a psychiatric hospital in Devizes, pretty central in the county but still three-quarters of an hour by car from the county town, Salisbury (going by public transport will take you an hour and a half, if you’re lucky). It’s called Daisy because its floor plan looks like a daisy, as can clearly be seen here. 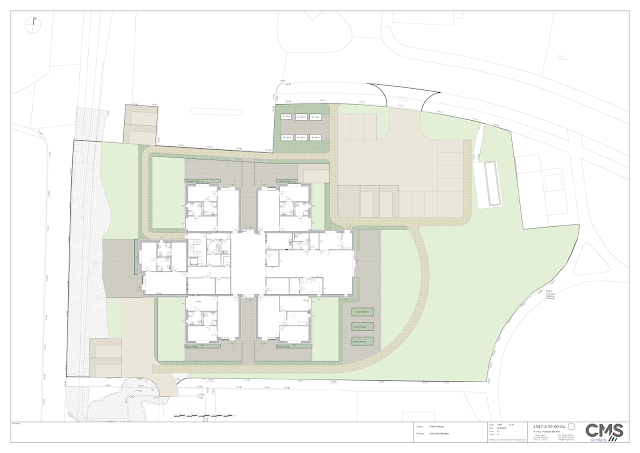 I have nothing else to say.