I’ve not wanted to blog anything about the #Mazars report into deaths at Southern Health until I’ve had a chance to see and digest the final report. But this internal briefing [update and correction - my error - this wasn't an internal briefing but a statement that was sent to universities with students at Southern Health] from Katrina Percy, tweeted by @sarasiobhan earlier today (see below), shows such a catastrophic (wilful?) lack of understanding that I need to say something quickly before such misunderstandings become entrenched. 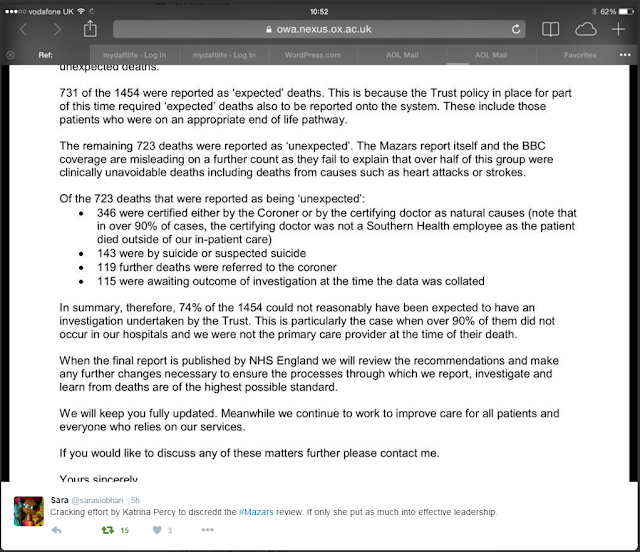 Where to start with this?  The Confidential Inquiry into the Premature Deaths of People with Learning Disabilities (CIPOLD), conducted by the University of Bristol, should be required reading for anyone wanting to understand the issues involved (see here for the full report http://www.bris.ac.uk/media-library/sites/cipold/migrated/documents/fullfinalreport.pdf ). Page 34 in the full report defines an unexpected death as a “death which was not anticipated as a significant possibility 24 hours before the death or where there was a similarly unexpected collapse leading to or predicating the events which led to death”. So – an unexpected death is simply one that was not anticipated (by whom is an interesting question in itself, but anyway…) 24 hours before the person actually died. In the CIPOLD study, 43% of the deaths of people with learning disabilities were defined as ‘unexpected’.

Whether a death is unexpected or not is not equivalent to whether a death is ‘premature’. A death is defined on page 35 of the report as premature “if, without a specific event that formed part of the “pathway” that led to death, it was probable (i.e. more likely than not) that the person would have continued to live for at least one more year”. In the CIPOLD study, 42% of the deaths of people with learning disabilities were premature.

Why have I gone on about this in such detail? Because I think it’s vital to gaining an understanding of the deaths of people with learning disabilities if we’re going to do better at not killing people before their time.

Katrina Percy’s statement shows a profound lack of interest in or understanding of these issues, in a number of ways that shocked me (I really shouldn’t be shocked by now, but I’m going to choose to treat my naivety as a weird sort of strength):

First, the statement assumes that all ‘expected’ deaths are by definition unavoidable, do not require investigation, and there is no point in investigating them. WRONG! Expected deaths just mean those that might have been anticipated 24 hours before. If a person doesn’t get cancer screening and therefore has a late diagnosis of cancer, their death will be ‘expected’ but still avoidable. If a person spends years on anti-psychotic medication, with all its attendant effects on weight and other impacts on physical health, a person’s death might be ‘expected’ but still avoidable. A specialist mental health and learning disabilities service might be expected to be interested in these causes of death, and want to something about it? Not in Southern Health it appears.

Second, I’m horrified by the statement that heart attacks and strokes are ‘clinically unavoidable’. A specialist mental health and learning disabilities trust, which will be largely responsible for the prescription of psychotropic medication such as anti-psychotics and anti-depressants, should be profoundly concerned about the impact of their medication practices (such the effects of anti-psychotics on weight gain, for example) on people’s health risks for deaths through heart attacks and strokes. This “not me guv” response shows an appalling lack of understanding of how to reduce the risks of people dying. It’s worth bearing in mind that 17% of adults with learning disabilities known to GPs in England are prescribed anti-psychotics (see https://www.improvinghealthandlives.org.uk/securefiles/151214_1614//Medication%20easy%20read%20report.pdf ), and in the 2014 learning disability inpatient census 73% of inpatients with learning disabilities had been prescribed anti-psychotics in the previous 28 days (see http://www.hscic.gov.uk/catalogue/PUB16760 ).

Third, ‘natural causes’, really? How does Katrina Percy have the effrontery to make this argument? Southern Health originally tried to classify Connor’s death to @sarasiobhan and others as ‘natural causes’, when through JusticeforLB fighting tooth and nail his death was determined to be preventable and an inquest jury found this was due to neglect on the part of the Trust. Surely this statement of Katrina Percy only serves to raise doubts about other people’s deaths that were classified by the Trust as ‘natural causes’?

So, Katrina Percy is stating that all the expected deaths, and all those unexpected deaths due to (cough) ‘natural causes’, shouldn’t been the focus of any interest by Southern Health in their deaths; especially as “we were not the primary care provider at the time of their death” [Aside – what does this frantic buck-passing say to Southern Health vanguard GP practice colleagues? When the going gets rough, we’re going to chuck you overboard?]. For both people with mental health problems and people with learning disabilities in the care of a specialist trust you wouldn’t expect the specialist trust to be the primary care provider. The trust is, however, responsible for the diagnosis and ‘treatment’ of specialist support, including psychotropic medications, anti-epilepsy medications, and inpatient services. Many people will have long-term contacts with the Trust, over months or years. To try and fob these people off as solely the responsibility of people’s GPs is desperate and dangerous, especially as the support offered (or in the case of some people with mental health problems, refused) can have major short and long-term effects on people’s health, including their deaths.

And to add a final insult to injury, the statement says that most of the deaths ‘did not occur in our hospitals’. Well, the trust does have inpatient services, but it isn’t an acute trust. At Connor’s inquest, the Southern Health legal team were very keen for the coroner’s report to state that his death occurred in John Radcliffe Hospital rather than Slade House (an ambulance took Connor to John Radcliffe Hospital where his death was officially ‘called’). So does this count as a death ‘that did not occur in our hospitals’ Katrina Percy? And how many more people’s deaths have been ‘classified’ in this way?

If this statement was intended to discredit the (still unpublished at the time of writing) Mazars report, for me it’s done exactly the opposite. It’s revealed a Chief Executive (who knows what other people working in the Trust are making of this?) who has a dangerous lack of understanding of what a specialist trust should care about, and is fixated on reputation no matter what devastation it causes. No more words.