This blogpost is updating a post I did a few months ago about how many people were being admitted to inpatient units for people with learning disabilities and/or autistic people. In the light of the experiences of people like Eden, who has ended up being sent back to an inpatient unit only recently after leaving several years spent in them, I want to see if the statistics can tell us anything about people going back into inpatient units (otherwise known as readmissions).

This blogpost uses information from the Assuring Transformation dataset, which is updated monthly by @NHSDigital. When reading this blogpost, it’s worth remembering that Assuring Transformation statistics are submitted by commissioners, who tend to focus on people in specialist learning disability inpatient services who spend relatively long periods there. Another dataset, the Mental Health Services Dataset (MHSDS), focuses more on people with learning disabilities and/or autistic people in shorter-term general mental health inpatient services – unfortunately I can’t see any readmission information reported there.

Every month, the Assuring Transformation statistics report how many people have come into an inpatient unit, according to commissioners. The graph below adds these together in six-month blocks over two and a half years (July-December 2015 through to July-December 2017) to see whether there are any changes over time. 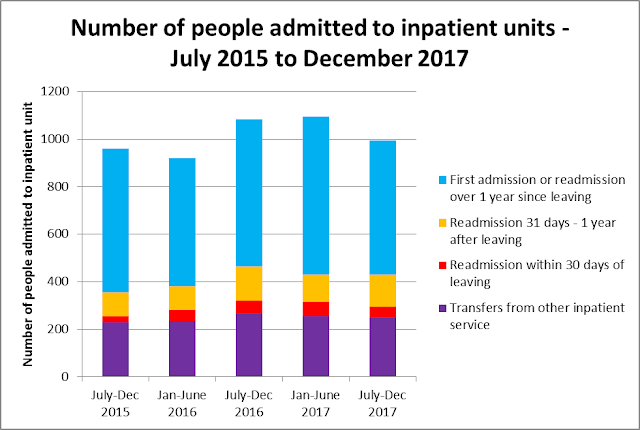 What do I see in this graph?

First, the overall number of admissions to inpatient units doesn’t seem to showing a clear downward trend over time. The overall number of admissions for July-December 2017 (990 people in six months) is down from figures throughout late 2016 and early 2017, but is still higher than the figures for two years earlier (965 people July-December 2015).

Second, a consistent quarter of ‘admissions’ are actually people being ‘transferred’ from another inpatient unit, a proportion that is remarkably consistent from July 2015 to December 2017. In July-December 2017, this was 25% of admissions, representing 250 people.

Unfortunately, from the statistics we don’t know any more about the circumstances of people being readmitted to inpatient units. There is information on the ‘source of admission’ - where all people admitted to inpatient units have come from (those admitted for the first time, those readmitted, and those ‘transferred’). The graph below shows this information in the same six-month blocks as the first graph, going back to January 2016. 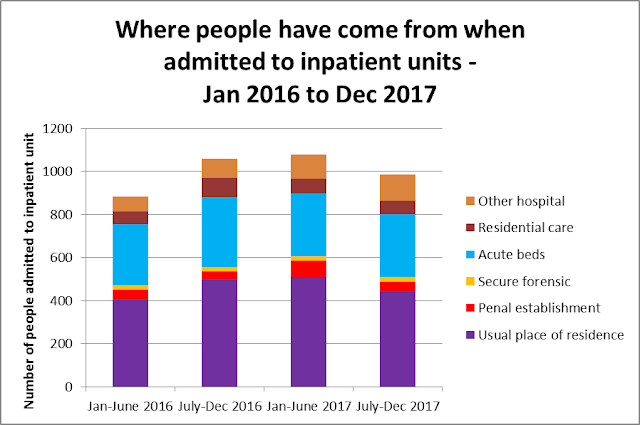 Like the first graph, where people are coming from before being admitted to an inpatient unit seems to be pretty static over the two years.

In July-December 2017, over two fifths of people (44% - 440 people) were admitted from their ‘usual place of residence’ – this is defined as including living with family, supported housing/living, sheltered housing (as long as there is no ‘health’ element to the support provided), and having no fixed abode (the impact of homelessness on people with learning disabilities and/or autistic people is pretty invisible generally and needs urgent attention).

Fewer people (7% - 65 people) were admitted to an inpatient unit direct from residential care – we don’t know if any of these were people living in places that had been re-registered with the Care Quality Commission from hospital units to residential care homes.

As is to be expected from the ‘transfer’ information in the first graph, substantial numbers of people (120 people – 12%) were ‘admitted’ from an ‘other hospital’ (defined as an NHS or non-NHS hospital ward specialising in mental health and/or learning disabilities) and a further 45 people (5%) were admitted from an NHS ‘secure forensic’ service.

A small but consistent proportion of people (5% - 45 people) were admitted from a ‘penal establishment’ – this is defined as including prisons, young offenders institutions etc, but also police stations and police custody suites.

Well over a quarter of people (29% - 290) were admitted from ‘acute beds’. I looked at the definition of this as I wanted to see if it included mainstream mental health inpatient beds in general hospitals. It turns out it doesn’t – these are people being admitted to inpatient units direct from ‘wards for general patients or younger physically disabled people, or accident and emergency’. My money is on a lot of people going direct from A&E to inpatient units.

Not sure there’s a grand conclusion to be drawn from these statistics, but there’s enough to worry me. With a year to go until the end of the Transforming Care programme, and no national strategy in sight for people with learning disabilities, it at least looks like the Transforming Care is struggling on its own terms. What would I expect to see from these statistics if Transforming Care was meeting its goals? I would certainly expect to see the number of people being admitted to inpatient units going down if pre-admission Care and Treatment Reviews and other measures were having an effect. If people were in the right place for the minimum period of time, then I would also expect to see the number of people being transferred between inpatient units dropping. And if people were leaving inpatient units to go to places with the right support, then the number of people being readmitted to inpatient units should also be dropping.

Having said that, it’s obvious that the Transforming Care programme is trying to swim against a pretty hefty tide – a developing (developed?) catastrophe in education for children with learning disabilities, ever higher hoops to be jumped for more thinly sliced social care support, and signs that community health services generally are disinvesting from supporting people with learning disabilities at any age. Why do people like Eden have to be the canaries signalling imminent explosion in this particular coal mine?
Posted by Chris Hatton at 15:23