Towards the end of 2017 I did a five-day series of blogposts (you lucky people…) on the progress of Transforming Care in reducing the number of people with learning disabilities and autistic people in inpatient units (see here for the first of the five), according to the available statistics. As Transforming Care does or does not come to an end at the end of March 2019, I thought it might be useful to update four of these five blogposts. Leaving aside the issue of the overall number of people in these inpatient units (I’m confident this will be covered elsewhere), I want to look again at some of the other statistics that give us some clues about what has been happening with Transforming Care and what we might expect to find in the near future.

These blogposts will focus on information produced publicly by NHS Digital from two datasets. First, the Assuring Transformation dataset – for this dataset, health service commissioners provide information (sometimes retrospectively) on the number of people with learning disabilities and autistic people in specialist inpatient services and on various aspects of what is happening with or to people. I’ve collected some of the information into six-month or yearly blocks, and some of the information I report for every three or six months rather than every month (both you and I would not survive that amount of information…). This means that most of the information goes up to September 2018 or at the latest December 2018. Second, the Mental Health Services Dataset (MHSDS – also available via this web address), which reports information collected by mental health service providers concerning people identified by them as a person with learning disabilities or an autistic person – this has been published monthly starting more recently than the Assuring Transformation dataset and is less detailed about processes. In different ways both datasets are partial – Assuring Transformation does not include a lot of people in mainstream mental health inpatient units, and some big independent sector inpatient service organisations are not yet reporting to the MHSDS.

As with the previous series, these four blogposts will focus on:


So – much of the focus of the Transforming Care programme has been on getting people out of inpatient units, but the slower than planned reduction in the overall number of people in these units suggests that there are still substantial numbers of people coming into these units. What do the statistics tell us about this?

Every month, the Assuring Transformation statistics report how many people have come into an inpatient unit (called ‘admissions’) according to commissioners. The graph below adds these together across three different years, October 2015 to September 2016, October 2016 to September 2017, and (you guessed it) October 2017 to September 2018), so we can see the number of people coming into these units and whether they have changed over time. 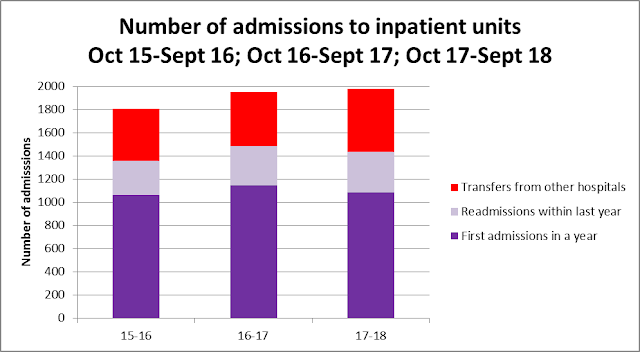 Information from the MHSDS tells a very different story. The graph below shows information on how many times people with learning disabilities and autistic people have been admitted to inpatient units/wards, for just six months (April to September 2018). The most obvious thing is the headline figure of 9,950 admissions in six months, a rate of people being admitted 10 times higher than that reported in the Assuring Transformation dataset. What does this vastly higher headline figure include? First, it includes a lot of admissions of inpatient units for the purposes of ‘respite care’ – there were 2,745 occasions (28% of admissions) when people were admitted for respite care in these six months, and for almost all of these episodes of respite care (94%) the person was in and out of the unit for a short period of time, within the same calendar month (other people may also have been in for short periods of time but just crossing the boundary of a calendar month). In the same six months there were 7,205 admissions to inpatient units ‘not for respite’ purposes. Just over half of these admissions (3,750 admissions, 52%) were for people who went in and out of the unit within the same calendar month. The MHSDS is clearly providing a completely different picture to the Assuring Transformation dataset, mainly because it is recording a huge number of people going into and out of (mainly general mental health) inpatient wards for short periods of time and for a range of reasons (are inpatient units the most appropriate place for ‘respite care’?). Transforming Care as a programme seems to be paying no attention to the experience of these large numbers of people with learning disabilities and autistic people. 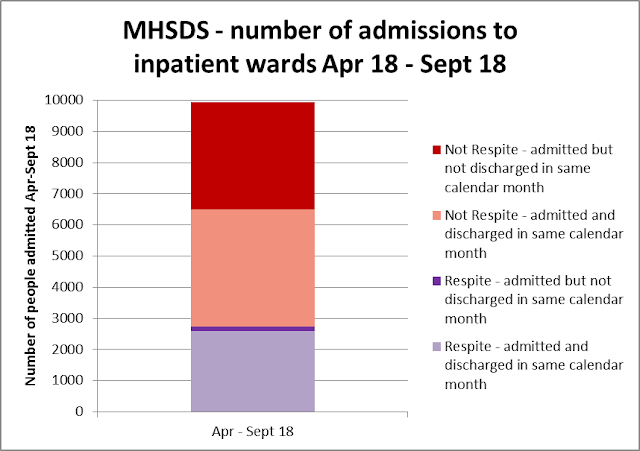 What kinds of places are people being admitted to inpatient services coming from? The graph below shows this information from the Assuring Transformation statistics, for two one-year blocks, October 2016 to September 2017 and October 2017 to September 2018. Even from one year to the next, the picture is changing. 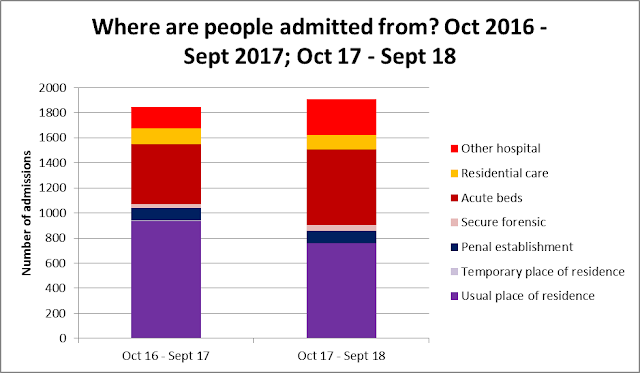