Transforming Care report card 2: How far are people from home, for how long?

This blogpost is the second of four, updating a series of blogposts on various aspects of Transforming Care I wrote towards the end of 2017. The first blogpost in this updated series looked at who was being admitted to inpatient units, and where they were being admitted from. This second blogpost will focus on two aspects of what happens to people in inpatient services, how far people are from home and how long they are in inpatient services. They use two sources of information, both provided by NHS Digital; the Assuring Transformation dataset and the Mental Health Services Dataset (MHSDS). Rather than going through the differences between them again (and the differences are important) there’s a short description in the previous post which is worth having a look at.

One of the main things highlighted by Transforming Care is having crisis and inpatient services close to home. The graph below reports information on the ‘distance from home’ of people in inpatient units, as reported in the Assuring Transformation dataset. The graph firstly shows that there has been virtually no change in how far people are from home, from November 2016 to February 2019. Secondly, the graph shows that a lot of people are a very long way from home. In February 2019, substantially fewer than half of people (1,015 people; 43%) were less than 50km from home (hardly a short distance). Almost one in five people (430 people; 19%) were in inpatient units between 50km and 100km from home, and a further one in five people (485 people; 21%) were in inpatient units more than 100km from home. Thirdly, for one in six people (360 people; 16%) commissioners cannot even report how far they are from home, a proportion that has stayed consistent for well over two years. 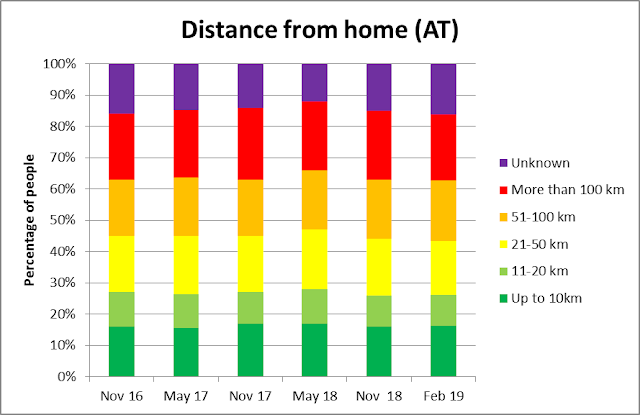 The graph below shows equivalent information from the MHSDS, which with its inclusion of people in short-term mainstream mental health inpatient units (including for ‘respite care’ – see the last blogpost), presents a very different picture. However, the trends over time are concerning. Most obviously, the recording of this information is getting worse rather than better over time – for a third of people (33%) in December 2018 the distance from ‘treatment’ (interesting difference in wording compared to Assuring Transformation) was unknown, compared to 22% of people in August 2017. This makes any other trends over time (which mainly show a reduction in the number of people living less than 10km away from ‘treatment’ over time) difficult to interpret, as it could be that local people in inpatient units for short periods of time (e.g. for respite) are less likely to have their home postcodes recorded in the MHSDS. 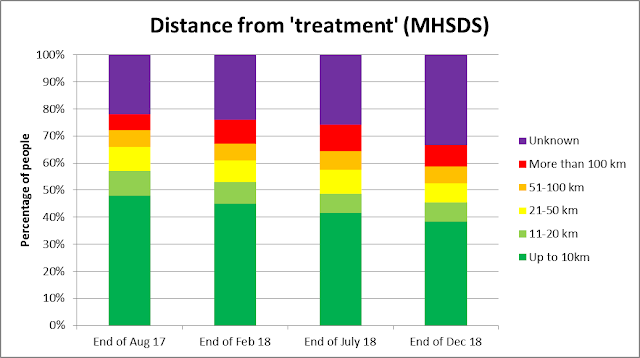 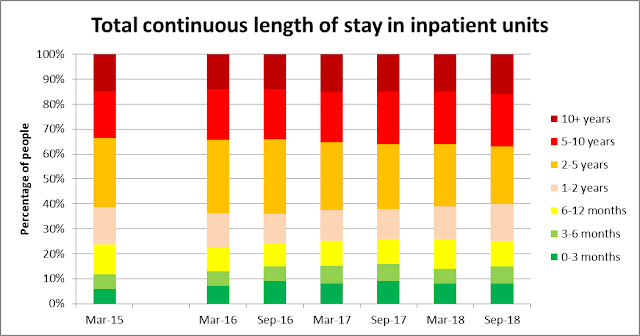 Finally, Assuring Transformation also reports the average length of time that people have been in their current inpatient unit, and continuously in inpatient services. The graph below shows that people were on average in their current inpatient unit for under 3 years, with this length of stay gradually falling from March 2015. In contrast, the total length of time people have been continuously in inpatient services has increased slightly and is now standing at an average 5 years 6 months.

What does this mean? First, it’s obvious that inpatient services have not become more local as Transforming Care has ‘progressed’, with Assuring Transformation reporting that two fifths of people are more than 50km from home and this information simply not being reported for many people. The information on how long people are staying in inpatient units reflects the increasing ‘churn’ of people between inpatient units without seeing the outside world, with people still on average spending 5 and a half years continuously in some form of inpatient unit. Reducing distance from home and length of stay were both supposed to be central to Transforming Care – as far as we can tell, these have not improved and may in some respects be getting worse.
Posted by Chris Hatton at 06:59