This blogpost is the final one of four looking at the Transforming Care programme through the prism of the national statistics regularly produced by the ever excellent @NHSDigital, updating a series ofblogposts I wrote towards the end of 2017.

The third blogpost looked at planning and reviews for people within inpatient services.

This final blogpost will focus on the number of people leaving inpatient services (charmingly called ‘discharge’) and what is happening leading up to people leaving. Getting people out of inpatient units has arguably been the major focus of activities under the Transforming Care banner. Again, at this point the impact of the Transforming Care programme should be visible in the number of people getting ready to leave, how well people’s plans to do so are developing, and how many people are actually leaving to places outside inpatient services.

The first and most obvious question is whether people in inpatient services have a planned date to leave (I will pick up on the complications of what ‘leaving’ actually means later in this post). The graph below shows the proportion of people in inpatient services with a planned date for transfer, from March 2015 to September 2018 (according to Assuring Transformation data). There was a worrying drop in the proportion of people with a transfer date in 2016, but by September 2018 well over half of people (58%) had a planned transfer date, the highest proportion recorded to date. 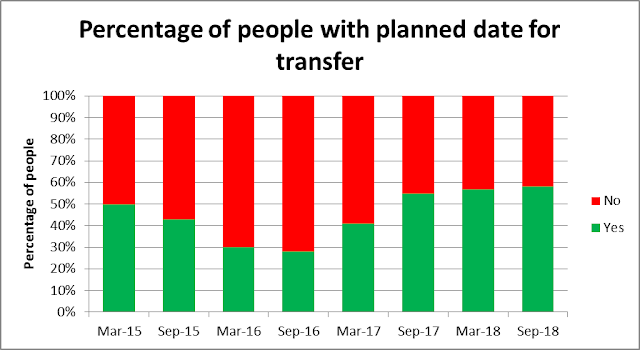 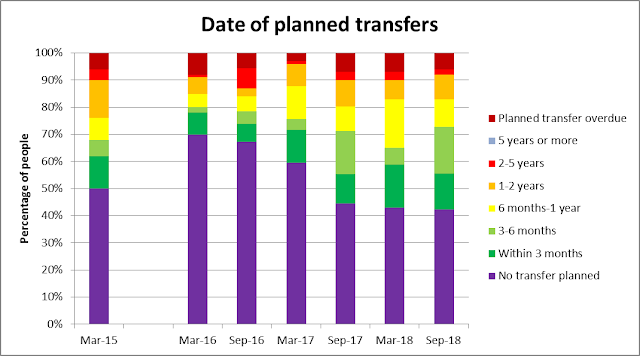 So far, the statistics look like there is a push from Transforming Care that is having an impact on the number of people with plans to leave, although this push does not seem to have massively accelerated as the finish line for the policy comes closer. Do we know anything about the plans themselves?

Well, if people are leaving the inpatient unit to go home in some sense then my expectation would be that the person’s local council should be aware of the plan to leave. The graph below shows information from Assuring Transformation based just on those people with a plan to leave – for this group of people, are councils aware of the plan? Over time, the proportion of people with a plan where their council is aware of that plan continues to drop substantially – from over two thirds (69%) in March 2015 and March 2016 to less than half (49%) in September 2018. Just as worrying is that in September 2018, for two fifths of people (40%) it wasn’t known whether the council was aware of the plan or not, a huge increase from March 2015 (7%). At the very least this suggests that the close working between health and social care envisaged as central to Transforming Care is less than universal. 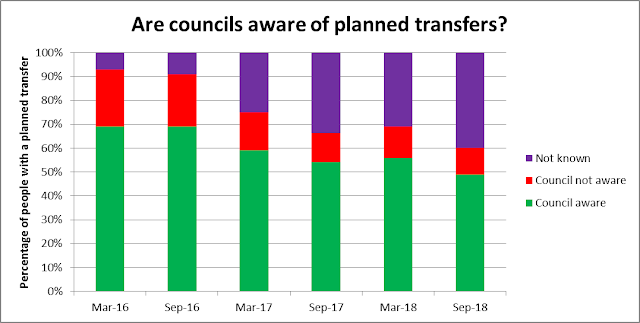 There are other signs too of potential haste in making plans to leave. The Assuring Transformation statistics report whether a range of people (the person themselves, a family member/carer, an advocate, the provider clinical team, the local community support team, and the commissioners) have agreed the plan to leave. For those people with a plan to leave, the graph below reports the proportion of their plans that have been agreed by different people, from March 2016 to September 2018. Over time, the proportion of plans agreed by anyone and everyone potentially involved has plummeted. Only two-fifths of plans (40%) had been agreed by the person themselves in September 2018, compared to almost two thirds of people (64%) in March 2016. Even bigger drops are reported for the proportion of family/carers (from 60% to 35%) and advocates (from 64% to 38%) agreeing the plans. 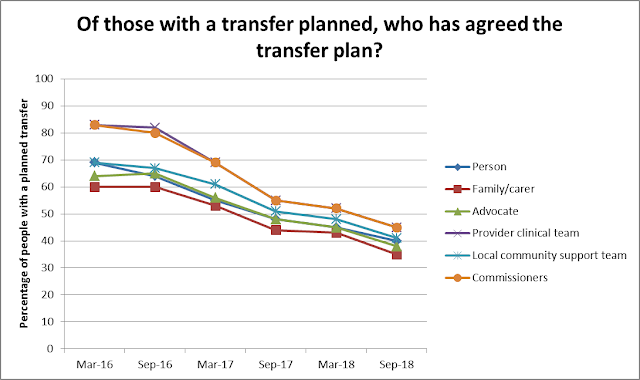 Of the people who have been ‘discharged’, in 2017/18 almost a quarter of people (535 people; 24%) moved to independent living or supported housing. Another fifth of people (490 people; 22%) moved to their family home with support, making nearly half of everyone ‘discharged’ from inpatient services.

Where did everyone else go? For almost a quarter of people in 2017/18 (525 people; 23%) their ‘discharge’ was actually a transfer to another inpatient unit, confirming the picture of ‘churn’ of people passed around inpatient services found elsewhere in this series. Hundreds of other people (375 people; 17%) moved into residential care. Given that some inpatient services have re-registered themselves as residential care homes with the CQC and a panoply of 'step-down' and other services are registered as care homes, it is unclear to what extent people are leaving an inpatient service to move somewhere more local and homely, moving somewhere very similar to where they were, or not actually moving at all.

In 2017/18, there were also another 235 people (10%) who moved to an ‘other’ location – again it is unclear what these ‘other’ places are, but are they wildly different from where people were moving from? Finally, 50 people (2%) were in the puzzling category of ‘no transfer currently planned’ while having apparently already been transferred.

There are also signs of some changes over time in where people are being ‘discharged’ to. Increasing numbers of people are being ‘discharged’ direct to another inpatient unit, or to ‘other’ places that may well be varieties of relatively restrictive places described as ‘step-down’, ‘rehab’ or similar. Fewer people are moving to independent living homes or to residential care, and increasing numbers of people are moving to supported housing or back to their families with some form of added support. 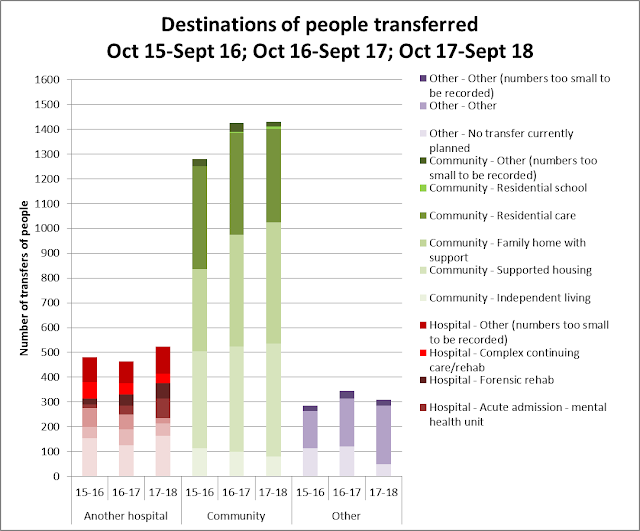 So in this final post in the series, there are definite signs that Transforming Care is exerting pressure for more people to have plans to leave their current inpatient services, and almost half of those people who are leaving are moving to independent or supported living or back to the family home. There are real worries about the feasibility and sustainability of some of these plans, and the extent to which many people ‘leaving’ inpatient services are actually leaving for something radically different or being churned around a system that doesn’t call itself an inpatient service system but looks mighty similar to the people living within it. The fact that for almost a quarter of people being 'discharged', they are actually being moved to another inpatient unit, is to my mind something of an indictment of the inpatient service 'system' and Transforming Care's lack of fundamental impact upon it.