This blogpost is the third of four looking at the Transforming Care programme through the prism of the national statistics regularly produced by the ever excellent @NHSDigital, and updating a series of blogposts I wrote towards the end of 2017 on the same issues.

This blogpost will focus on what the statistics are telling us about planning within inpatient services, just using statistics from Assuring Transformation. As Transforming Care moves towards a close (or not), its effects should be felt through the inpatient care plans people have, whether people’s needs are being regularly reviewed, and whether people are having regular, effective Care and Treatment Reviews (CTRs).

But it does mean that, towards the end of Transforming Care, there are well over a quarter of people (28% in September 2018) in inpatient services when, according to their care plans, they don’t need to be there. 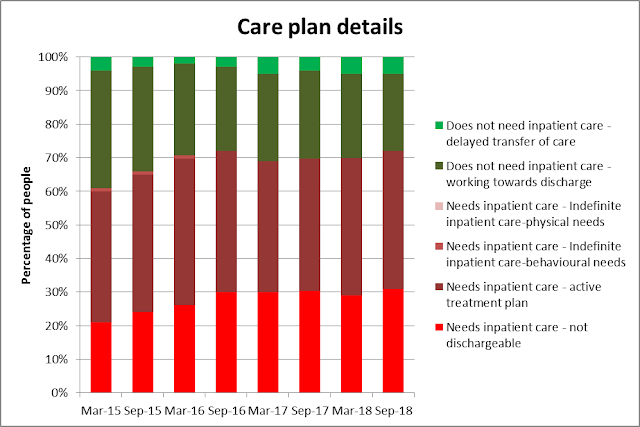 For everyone in inpatient services, reviews should happen regularly. The graph below shows how long ago people in inpatient services had had their last review, from March 2015 to September 2018. The graph generally shows that things seemed to get worse in 2016 but improved again in 2017 and was maintained through 2018. By September 2018, well over a quarter of people (29%) had had a review in the past 12 weeks, and almost a quarter (23%) between 12 weeks and 6 months ago. However, almost a further quarter (22%) last had a review between 6 months and a year ago, and another 23% had last had a review over a year ago. 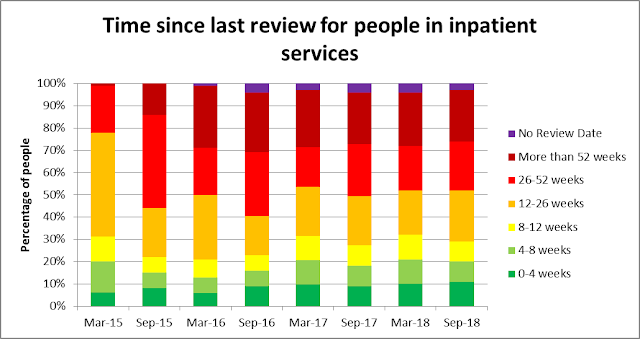 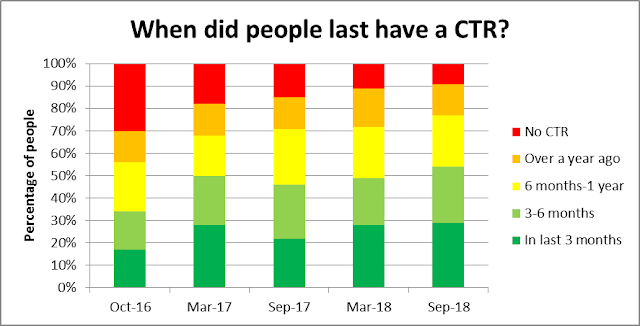 The graph below shows when people are next scheduled to have a CTR. Again, there are improvements from October 2016 to September 2018, where the proportion of people with no scheduled future CTR dropped from over half (55%) to around one in six people (17%). For a further 15% of people in September 2018 the date for their scheduled CTR had passed without a CTR happening, a proportion that is gradually creeping up. 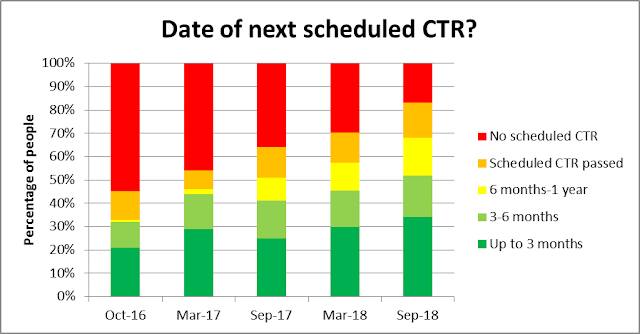